This time, this platinum was going to be my goodbye to Barry. Yes, really...

I wanted to do this platinum for several reasons. One reason was that the one I did in December didn't turn out as well as I had hoped. Things had changed, it was far more formal than it had been previously. It wasn't relaxed, it didn't feel very friendly. Nothing bad happened, it just didn't make me feel warm and welcome - and I had kind of grown accustomed to feeling like I was welcome. I wasn't made to feel unwelcome - it just didn't feel warm. And I didn't want my last platinum to feel like that.

And I wanted to do this one because it was my birthday week. I turned, uhm, "older" on September 17. So, this was only 3 days later.

And then the 3rd reason I wanted to do another platinum is because the home situation continues to worsen. There's a good chance that my ability to travel to see Barry could end at any moment, without warning. I decided I needed to tell him what he means to me, what his influence has done for me. Based on the stories I've heard from other people, my story is different. So, it just seemed that it would be a good idea to tell him, before it's too late.

What I didn't know is that I'm not capable of telling him - not in person, anyway. Every time I tried to practice what I would say, I cried. And instead of getting better with each practice session, it got worse. And then I started thinking about it being a goodbye, of sorts - and then things really got bad.

So, about a month before the actual event, I just threw up my hands and said, "we ain't doin' this!" It will be a platinum as usual, no goodbyes, no "stories."

And so that's what I did.

I've always hated what I've worn to my platinums. Actually, if I've ever had to dress up for any occasion, I've always hated what I wore. I'm thoroughly convinced that it's impossible for me to look good in anything. This time I found an outfit I actually liked. I was as confident as I could possibly be (which still isn't very confident) that I at least looked decent in it. But, of course, when the night came, things didn't fit the way they were supposed to, and other things went wrong. In other words, a typical platinum night.

I still wasn't nervous as I was preparing to go downstairs. But when I got to the theater entrance, I started to feel the nerves.

It didn't help that when I started walking backstage, all the memories from my 2009 platinum came rushing back. There were some moments during that platinum that weren't the best.

Then, when it came my time to step out into the hall, it was the same hall (or looked like it) that I had waited in back in 2009. It felt strange, and it felt scary.

One of the newer Stiletto folks was talking to me as we waited. The conversation really wasn't relaxing at all.

Then the lady who had been in front of me walked out of the room where Barry was. I was sent down the hall to stand with Kirsten, who was at the foot of a small staircase to led into Barry's room.

Kirsten indicated that I should take a deep breath. I think I was incapable of breathing at that point, so that didn't happen.

Then Kirsten started talking to me about the UK. She told me I should really try to go this time if I can.

Before I could respond, the door opened and Kirsten indicated I should follow her up the steps. (Yep, I remembered the steps from 2009, too.)

The first person I saw was the same bodyguard that had been at the December platinum. That didn't make me feel comfortable, because he had made me feel very uncomfortable in December. But he didn't make comments the way he did back then.

I walked around the curtain. My eyes weren't focusing on anything. I heard a voice tell me that I looked beautiful. I recognized it as Marc's voice, but I didn't see him.

I recognized that Barry was standing right in front, but I didn't really see him, either.

In fact, that's my biggest regret from this platinum - I was never able to fully focus on Barry and "see" him. I looked at him - the candid photos show that I was looking at him. But my only memory is vague - skin tone of his face, but not facial features. Occasional glimpses of a shade of blue that I know to be the shade of blue that his eyes are. But there's no other memory of him. Just his voice. That's the first time this has happened. Frequently I've been able to catch a quick look and then look away - but this is the first time that I can't remember seeing his face at all. I guess I was more nervous than I thought I was.

One of the things that the candids showed was that his hair was long. I was crossing my fingers that he would leave his hair longer for my platinum. He usually cuts it short just before I get to do a platinum. This time he left it long. I didn't get to appreciate while I was with him, but the candids show it. I'm thrilled with those.

Anyway, even though I couldn't see Barry, I could hear him. He was so funny. He said something right off the bat that made everyone laugh, and made me happy as well as made me laugh. It was both funny and flattering. I think I'm still glowing from that one.

I'm one of those who thinks of great comebacks several days after the fact. But this time I had one right on the tip of my tongue - thank goodness I was able to restrain myself, although I think he would have laughed if I had said it out loud.

That's one of the great things about this platinum - I got to hear him laugh so often. This was a laughing platinum. Everyone chimed in, asking questions or commenting on statements. And everyone laughed. 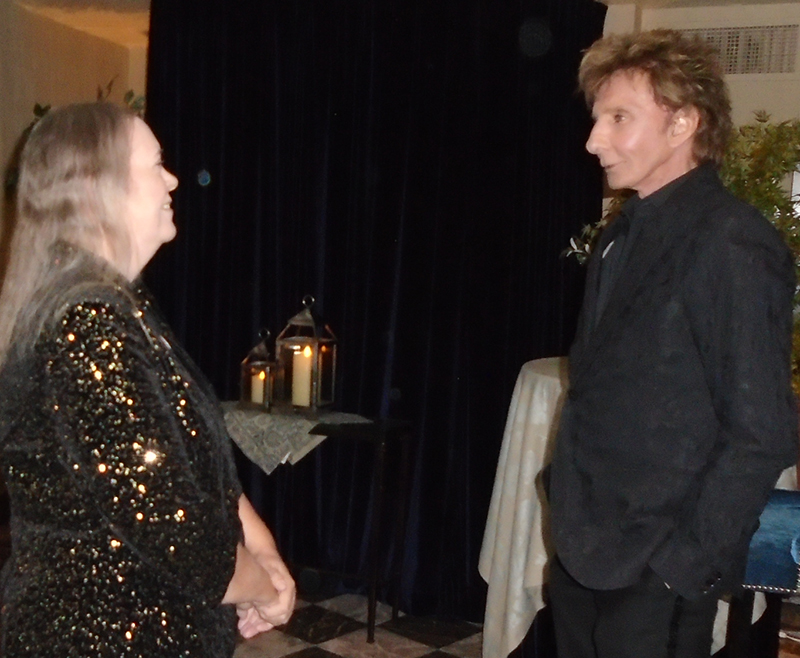 I'm there for Barry, and only Barry. But still, it was fun. I never felt like my time with Barry was being taken up by other people. I did feel that way in December. This time I didn't. Even when someone else said something, I was able to turn right back to Barry - and he was standing close by, ready to engage again. I got my Barry, even though everyone was participating.

Most of my candid photos didn't turn out very well. It's not surprising when everyone is talking as much as we were. It's hard to get good shots when people are talking. But it's pretty much the same in all of them. I'm looking up at Barry as if he's the most wonderful person in the world. Which he is... 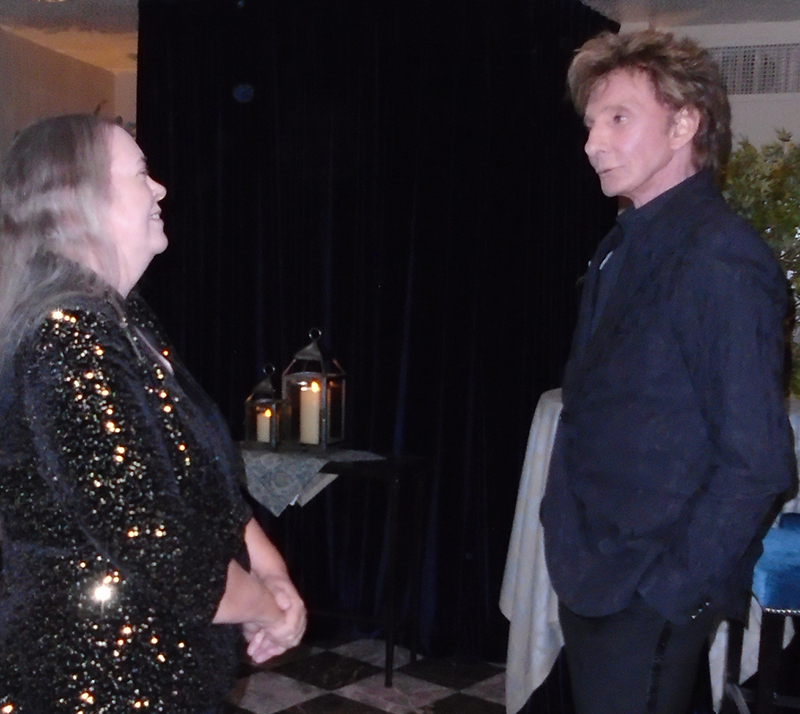 Barry started out by asking me if I'd been to a lot of the Westgate shows. That threw me for a loop. Because I've been to a lot of Westgate shows - a LOT. And he asked if I had been to the Hollywood Bowl, and if I'd been to Broadway. I think those questions were all leading up to his next statements. Basically, he was talking about being unable to change the Vegas show, and then he told me he was sorry about that. I kind of shrugged it off, and I told him that he was different every night. And then he seemed to shrug that off, as if he didn't want to accept that he makes the show different each night. He does.

For the most part, I wasn't nervous after the talking started. I did have a huge wave of anxiety hit me when Barry started asking about the area I live in. I don't know what caused the anxiety. It hit me suddenly, and my throat and mouth was so dry I couldn't speak. Barry asked me again where I lived, and I just couldn't it get it out. And he asked me to repeat, and I was struggling with it again. Thank goodness he was able to catch it the second time.

Or maybe he didn't, because I think it was Marc that spoke up at that point.

That part of the conversation started because Barry said that his plane had been canceled, and they had to drive to Vegas from Palm Springs. He said it was a boring drive, because it was "dirt, dirt, dirt, house...dirt, dirt, dirt, house." That was so funny. And then Barry asked about where I live, I got all choked up, and then Marc (I think) said, "That's what it's like where you live, right?" And then I responded, "Yeah, but there's less houses than what he just said." Everyone laughed.

I'm not even sure how Barry got to the topic, but I was aware he was asking if I had dogs. I said I did, and then he wanted to know what kind. He really seemed to want to know, because he asked me again what kind. I really hadn't even had time to respond to it the first time he asked. I got a little choked up again trying to say what kind of dogs I have, but I finally got it out.

Then Barry asked if I had other animals. I said I had cats and cows, and then Kirsten spoke up about the cows.

I'm hoping more stuff comes back to me in the coming days. It was kind of a whirlwind. There were no quiet moments - someone was always talking - most of the time someone was laughing. 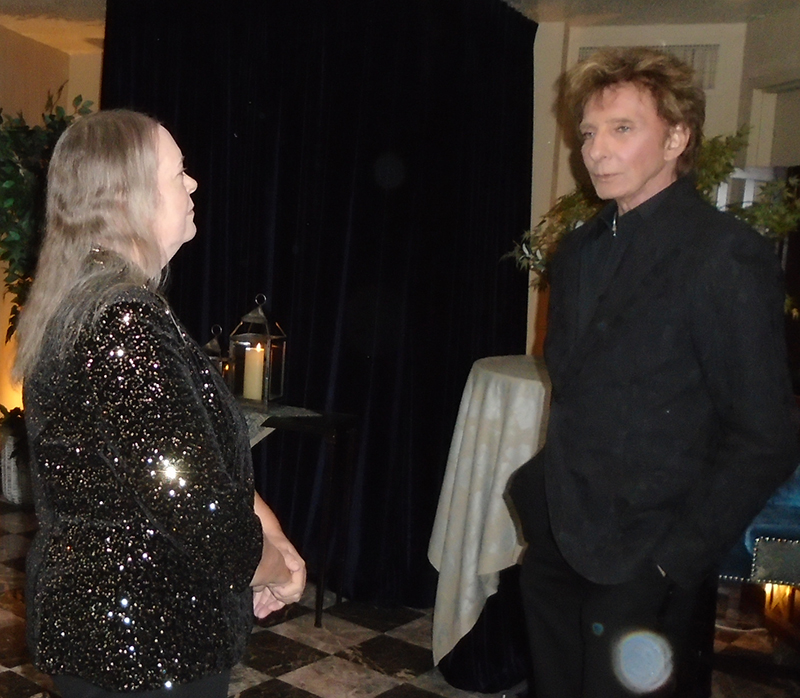 The bodyguard stepped forward then, and just as he had done in December, asked if I could take my own platinum photo. Barry laughed out loud. It bothered me when the guy did that in December, but this time it didn't bother me. I think Barry's laughter - his arm around me, and his laughter - I think that was what made me not care, and I was able to view the comment as joke.

The official photo turned out great. I think it's the best one yet. If not, it's a tie with the ones from the Gift of Love in 2017.

I got this candid, as well. 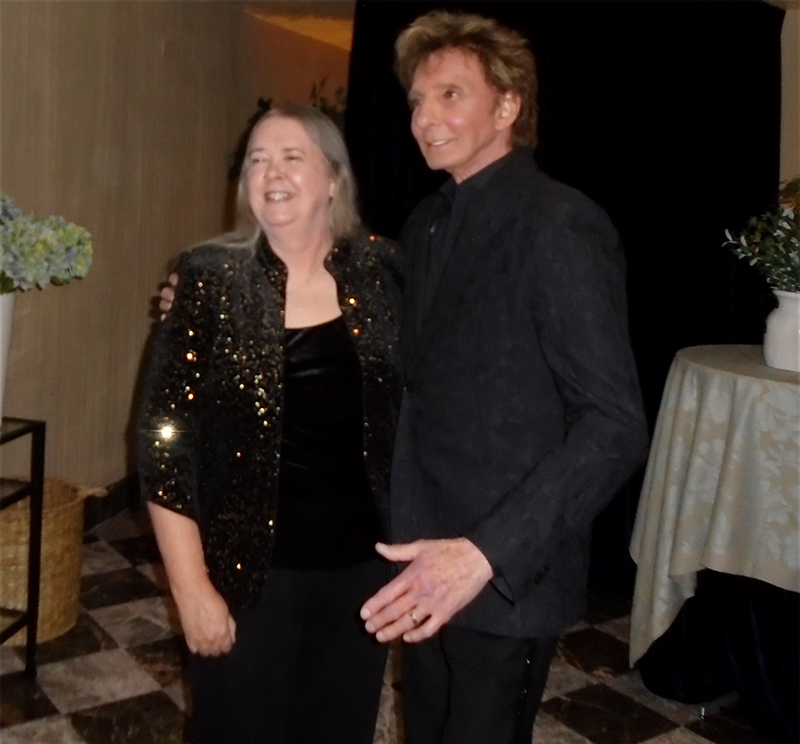 It's always so special to get to spend a few moments with Barry. I'm very grateful I've had these opportunities. He's been a very important part of my life for a very long time.

Maybe I didn't get to tell him why he's so important. But then, someone in his position has probably heard it all, anyway. My "story" probably isn't unique in any way.

And I simply can't tell him goodbye.

Back to the Platinum index