And this is exactly how I felt about getting to see Barry again! 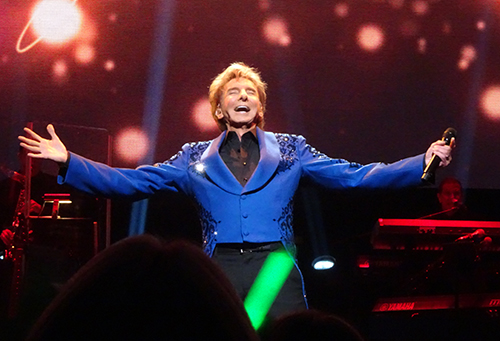 Wow, what a night! Not only did we get a fantastic show, we also got the exciting announcement about Harmony. 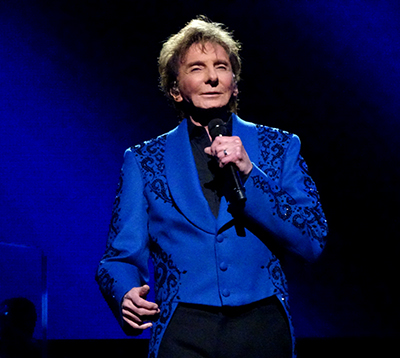 Speaking of LLWMI, Barry gave us a great performance. I need to find the right adjective to describe this type of performance. It's not sad and it's not happy. It's kind of teasing, but it's not. There's a gleam in his eye that makes you think of happy or teasing, but he's really not. But this also wasn't one of those performances where he seems sad that it's over. The gleam in his eye says that it's not over. This is my favorite type of performance of this song because it's fun - I don't get caught up in the lyrics as much.

This part of the song is always the same - there's always a wistful air about it. 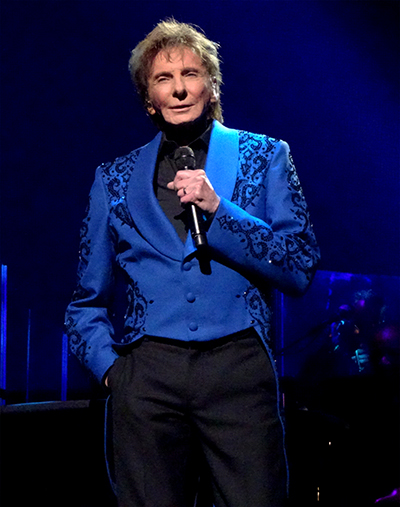 Barry held this note at the end of Brooklyn Blues for what seemed like forever. Impressive!

I usually don't take photos during Barry's song intros. I probably should occasionally. He's always so expressive. Even his intros are entertaining. This is from the intro to This One's For You, where he's talking about Grandpa Joe and Carnegie Hall. 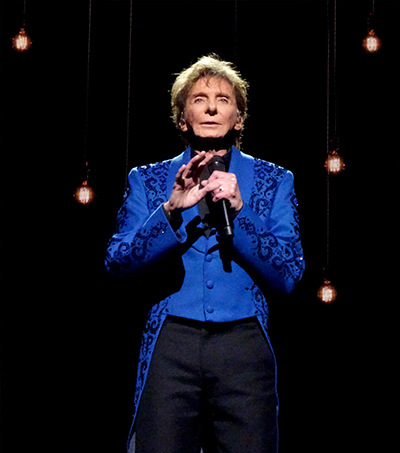 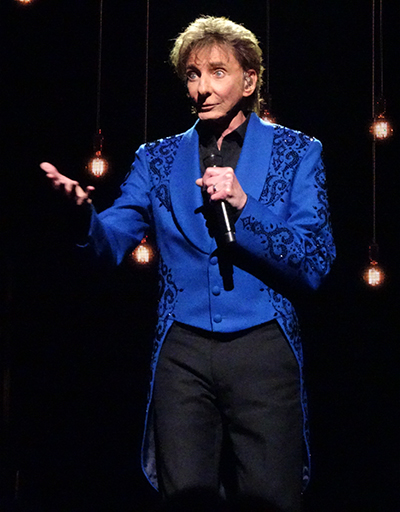 TOFY was beautiful tonight. It wasn't an overly emotional performance. But it was very believable. There was a lot of feeling in the song. 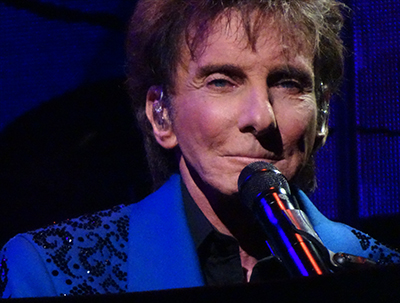 If possible, I think Barry's performance of This Is My Town was even more authentic. It's pretty easy to tell if a performance believes what they're singing. In this case, there's no doubt that Barry believes in the lyrics to this song. It's so much fun to watch him perform this.

I like the way the background graphics look real at times. Other than the stray glowstick, I love this image of Barry with NYC in the background. The entire visual creates a story.

Stop playing in traffic, Barry! Ha! This is what I mean about graphics that look real.

This was a surprise. I love the graphics, and the colors that are behind Barry - at least, that's what I've seen at other shows. But this sudden switch to total darkness, I really like this. He looks great against the black background.

Barry did a great job with Even Now. This performance didn't feel quite as sad as it sometimes does. But the degree of passion during the latter part of the song was fantastic. I've always like the "reach", but these last few shows Barry seems to have added a little to it - just slightly changing the way he does it. He reaches out toward something that isn't there, that's gone, or at least not visible. There's that feeling of longing when he reaches out. But now, he's been doing that, and then he changes it slightly so that it appears he can see it or feel it, and he's trying to grasp it. To me, that adds another twist to the performance. He can break your heart with the first part of the reach. But then when he does this new thing, this slight turning of his hand, it's like a plot twist. 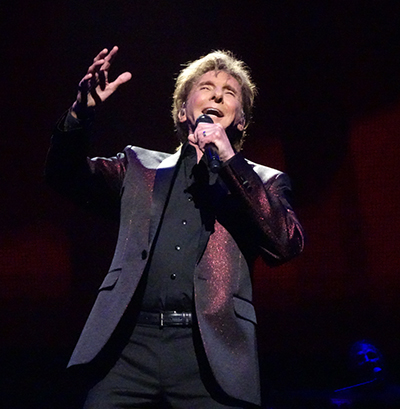 Barry got a huge ovation for Even Now. No, he got a HUGE OVATION!!!!! The cheering and applause went on forever.

When people yelled out tonight during Weekend In New England I thought Barry was going to skip right past it. But then he decided to react. So cute! 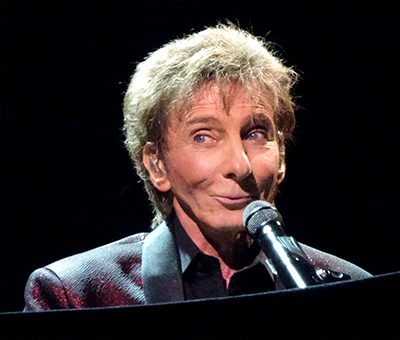 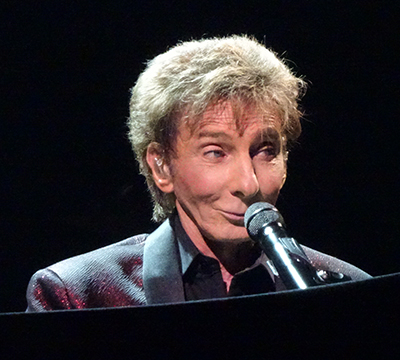 The "right now!" portion was kind of weak. There were a lot of disorganized squeals. At one point, Barry looked at the audience as if he were thinking "are you guys alright?? But he didn't say anything.

Barry also did a great job with Weekend In New England. He got a big ovation for this one, too - but the one for Even Now was the biggest of the night. This is from the very end of WINE. Barry appeared to be deep into his performance. 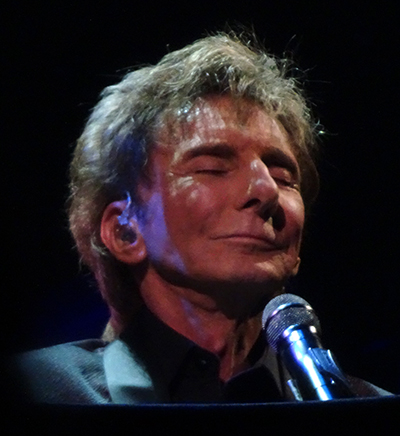 Barrys performance of Memory was awesome tonight. I caught myself thinking that I love this song. Wait! I dont love this song! But Barry has made me LOVE THIS SONG!

The music was fabulous. This was one of those performances where it all just came together - the music, and the lighting, and Barrys voice, and his interpretation - it all came together, and wrapped you up in the total experience, made you feel as if you were a part of the experience, made you feel as if you had become a part of it all. I love when Barry's shows do that for me.

Strange how the glowstick appears to be UNDER his jacket, though! Ha!

Awesome! Purple and green, awesome colors in combination. (What? You thought I was talking about something else?) 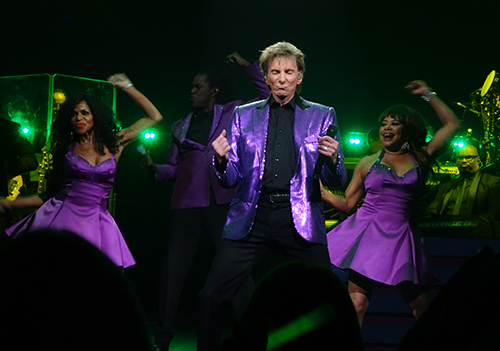 Yeah, that was awesome, too...

Barry followed the announcement by performing I Made It Through The Rain. That seemed very appropriate. Toward the beginning, he seemed to be making it clear that IMITTR was personal for him tonight. He gave us one of his cute expressions, but in context with the lyrics at the moment, it seemed quite fitting - it was typical "Barry".

It was a great performance of the song, too. This is the first time in a long time that my mind hasnt rejected the hope behind the song. Barry has a way of winning me over. I love the way he can make me believe when no one else can. The performance was extremely hopeful. It was all positive.

I've been trying to catch this moment at the beginning of Mandy. This is similar to what he's done in past shows. But something about this lighting looked different. And apparently it is, because I've never seen it where you could actually see his face in the shadows. 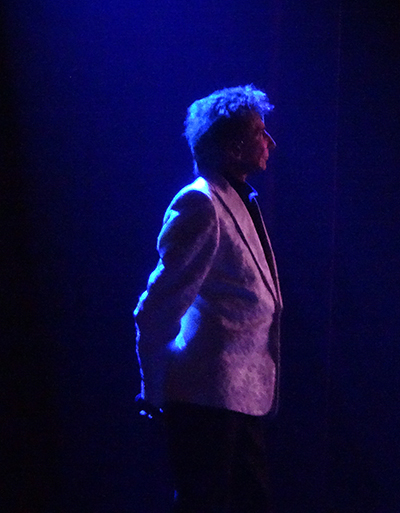 Mandy was great again. Barry has been singing it with so much feeling. And I love what he's been saying - that he "loves her because she brought us together." That's very touching to me. Probably because it's true for me - it has meaning for me. Because I became aware of Barry when I saw him perform Mandy on a TV show. Mandy did bring us together.

And I love this image!

One Voice was awesome! Barry tells the story of how the song was written. Kind of like This Is My Town, you can see a lot of joy in Barry as he performs the song.

"And everyone will sing..." 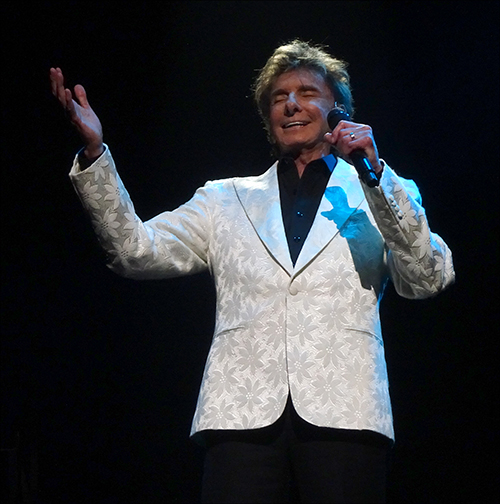 I really look forward to the medley every night. It's so great. The Old Songs is a favorite. You know, then entire medley is a favorite. When Barry starts performing it, I still feel in awe of how I'm listening to the soundtrack of my life - well, part of the soundtrack. But, all the songs have had so much meaning.

And The Old Songs is definitely one of them - it's one of those tunes that stirs emotion. I've never quite understood why Barry changed the lyrics from "my shoulder" to "your shoulder". I could speculate, but I would have no idea what I was talking about. But overall, I love this part of the medley. I like the little finger snapping part. Tried to catch it tonight, with some success. Got a really cute facial expression, too. 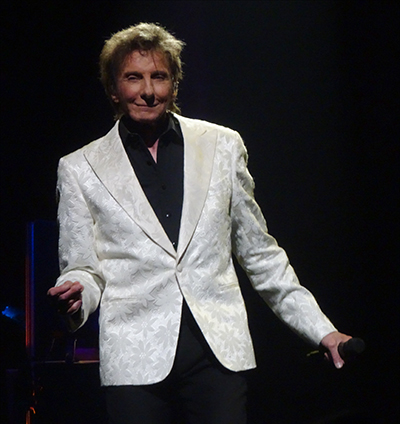 Barry always introduces Some Kind Of Friend as his only rock single, or maybe he says hit. I'm not sure. And I would consider Who's Been Sleeping In My Bed as rocking more. But... Barry does introduce SKOF that way. And tonight he caught me off guard. As he walked across the stage, he started playing air guitar. I wasn't expecting that. All things considered, this shot turned out pretty well. But he did it again a little later in the song, and I missed that one entirely. 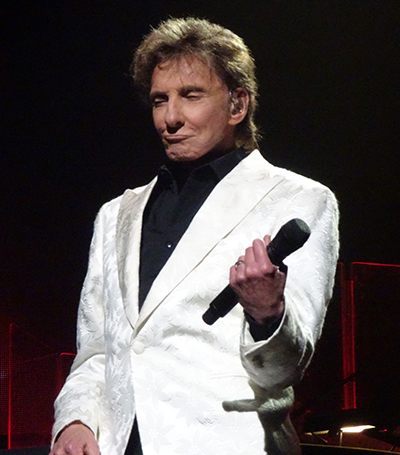 Read 'Em And Weep renders me helpless. Ha! So, I knew I'd better get a shot at the very beginning. Barry is always so dramatic for that first note of the song. And he switches so quickly between SKOF and this song.

I did get two shots of that dramatic moment. One is blurry, one isn't. And then, yep, I was pretty much helpless. I love REAW and the way Barry performs it.

I didn't recover until some point into Ships. I love that song, too. So, it wasn't much of a recovery, anyway!

Barry does another somewhat dramatic moment for the transition between Ships and Tryin' To Get The Feeling Again. Tonight was the first night that I noticed that. I think for the previous nights I didn't quite have the order of songs down. But by tonight I did, and so I was anticipating. And because I was focusing on that, it allowed me to notice the fine details of the transition. 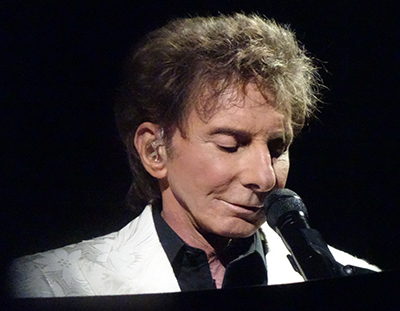 People say that I'm missing the show if I'm taking these photos. I'm absolutely NOT missing it. It helps me to focus in on what Barry is doing, and helps me to notice these little details that are missed so often. Those details are important. My ears are still hearing the beautiful music and Barry's beautiful voice. But there's so much more to the show. His interpretation - what is the tone of the song tonight? What is Barry trying to convey? What extra musical moments might have been inserted? Because things do change. The backups are artists, and they're playing by feeling, not just the notes on the paper. I like catching all those details. And even though the camera is a visual tool, you need to feel to use it properly.

And speaking of feeling, Tryin' To Get The Feeling Again was so awesome again. I love the way he paces and gestures. I love the fist in the air moments, too. So much passion and feeling. 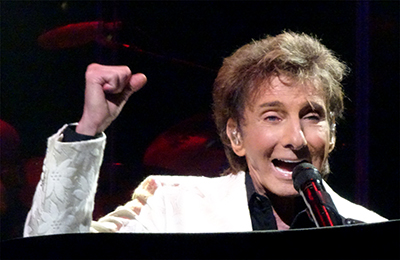 I think Ready To Take A Chance Again has one of the smallest footprints in the medley. I love that song, too. But it seems that it's more of a transition into Somewhere In The Night.

Barry has a little of a dramatic entry into Somewhere In The Night, too. I like it a lot. Barry's performance of SITN in the medley is slightly different from what we're used to seeing. It's still romantic, but not the midnight hues type of romantic. But again, it's just a piece of the song. I love the lighting change to the blue hue. And tonight I was blown away by the power that Barry put into that final note. 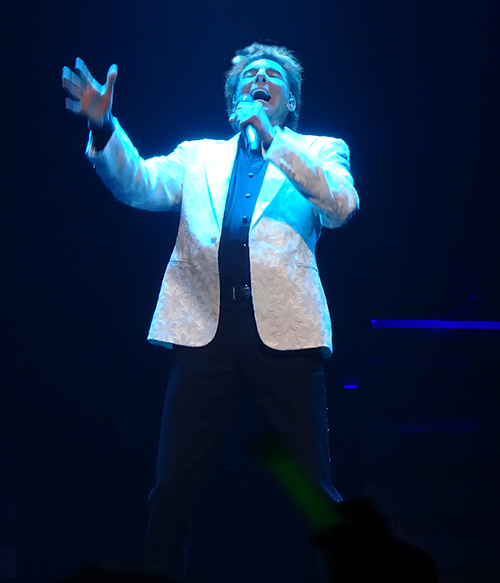 Here's something I haven't noticed... I noticed the beautiful green lighting at the end of I Write The Songs. But I had NOT noticed the rapid switch from green to blue spotlights. 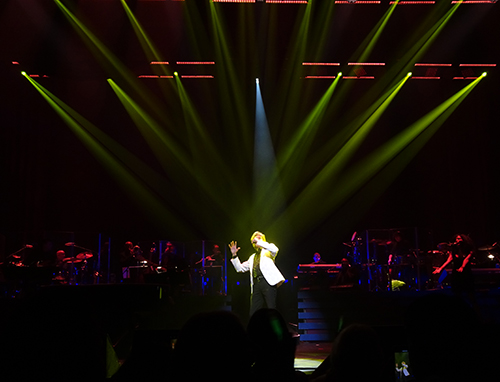 Tonight will be bittersweet. These shows have been awesome. I'm kind of sad to see it coming to an end. Even though, as I said with the first review, I couldn't have come to more of them, anyway. But my heart wanted to be here for all of them.

One of the final shots of the night, and one of my favorite. From the It's A Miracle reprise. 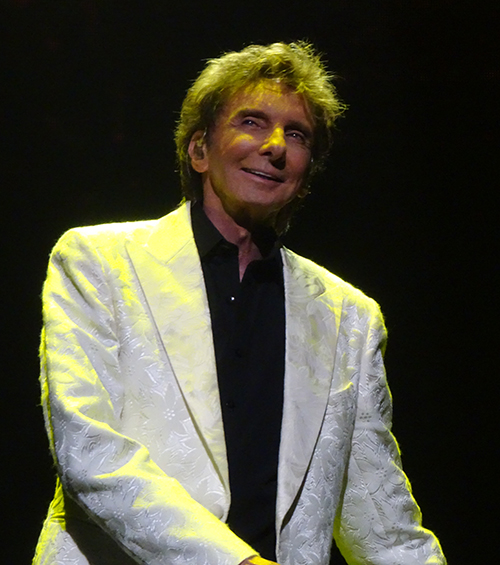