I caught it! Really, I don't remember this part of the intro looking so good in Vegas. I'm going to have to pay more attention when I go back. 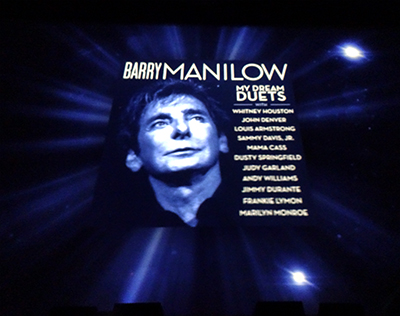 How exciting! Barry wore the blue jacket tonight! I was afraid I had missed it by not being able to see the first several shows. I love that jacket - such a beautiful shade of blue, and the trim is beautiful, too.

I do like New York City Rhythm as an opening to the show. If It's A Miracle weren't featured later in the show, I might not like it as well. But NYCR really does make sense. And it's uptempo and lively and it creates the same atmosphere, pumps up the audience. 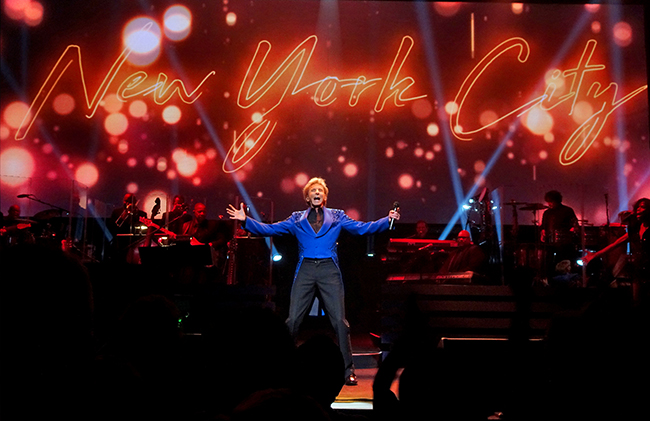 Barry looked so happy tonight. It was a nice surprise to find out that tonight's show would be broadcast on SiriusXM. It was a great show, too. And a great audience. Everything came together perfectly. (at least from my point of view)

This is from Daybreak.

Looks Like We Made It was great tonight. The way Barry performed it was kind of interesting. He started out with a smile. And it worked! You could easily imagine him running into her on the street, being happy to see her.

But then Barry walked to the side of the stage and became much more serious. And, is it just me, or does the hand in the pocket look especially great with this blue jacket?? 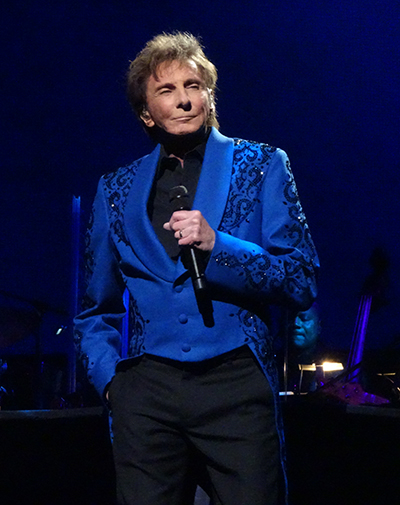 Barry had the audience reacting. He had us in the palm of his hand.

Then it was coming up to the point in the song where Barry usually does the sexy moves. I can remember listening to the audience reactions as that moment in the song approached, and thinking that he didn't even need to do anything - all he had to do was stand there and the audience was going to scream. And, in fact, Barry didn't do anything at first - and sure enough, the audience reacted just as if he had. I love it when that happens. If that isn't proof that Barry can still twist the audience around his little finger, I don't know what is.

Barry did throw in a few of the sexy moves, but, in comparison, very few. And we didn't need the moves. He already had us.

The graphics during Brooklyn Blues were incredible. It was the same that he uses in Vegas. But they were so sharp. And colors were so vivid! 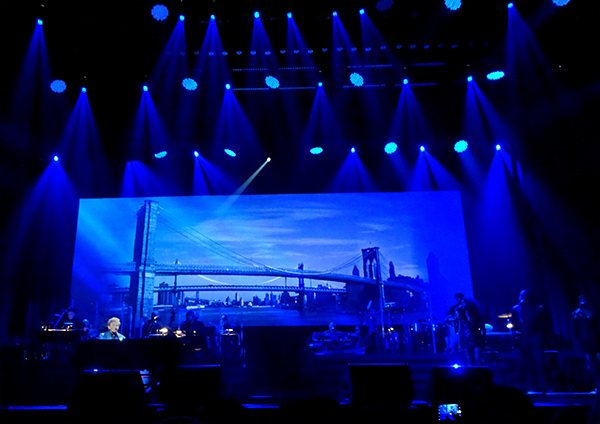 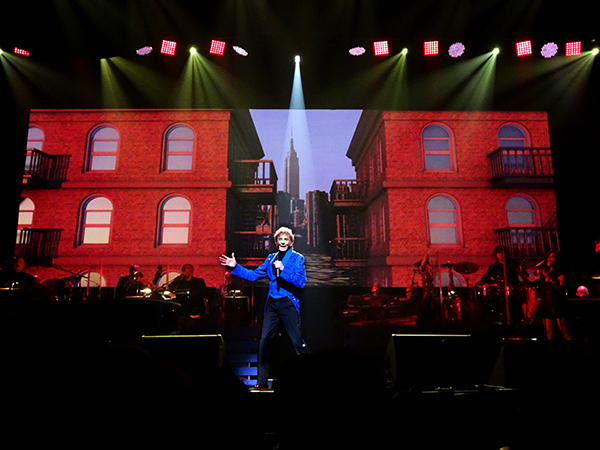 This One's For You was fantastic. The background is similar, but there are differences. The color scheme has changed. I always liked those lights that hang down behind Barry. They seem to hang lower in NY - I like that look. We got a great smile as we listened to Baby Barry and Grandpa. 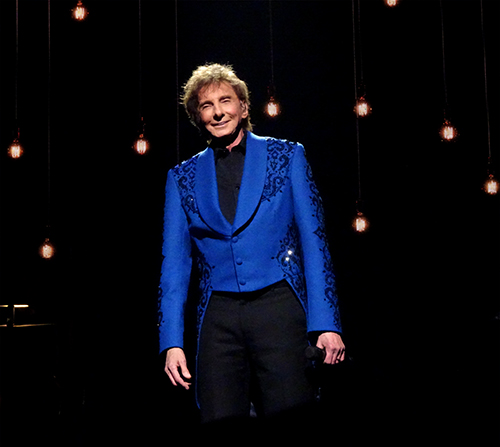 The ending of the song was especially emotional. I love the feeling that Barry put into it.

I really like the contrast between Barry's blue jacket and the milder tones of the photo of Barry and Grandpa Joe. 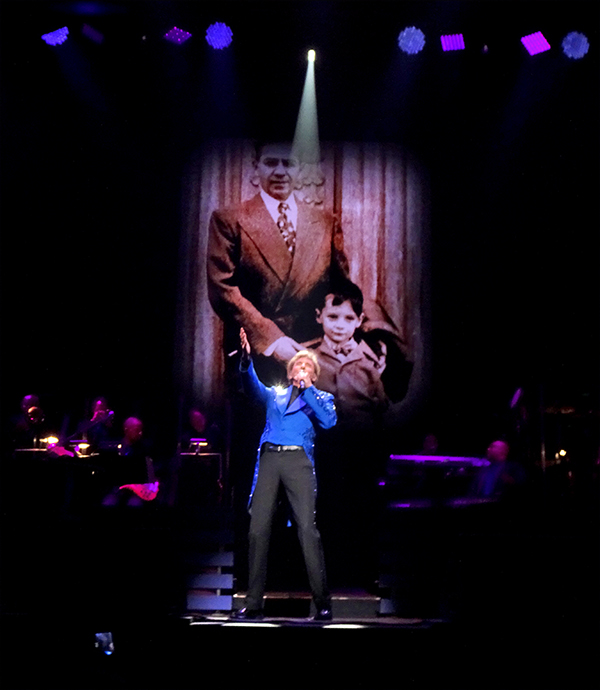 I really enjoyed This Is My Town. Barry brought the smiles back tonight. I always loved it when he performed the song that way, because it looked like he had so much joy as he was singing. It felt very genuine. Obviously we know that NY is Barry's "town" - but I still love it when his performance feels so authentic.

Even Now was great. I like the way he sometimes takes his hands off the piano and gestures to emphasize the lyrics.  It felt so real as he did this - his voice, his gesture, the expression on his face. I love it when he's able to make me believe the song.

And the ending, WOW! What a progression! Sometimes Barry reaches toward the sky as if he were sending out his longing thoughts to the other person.

Sometimes he stretches his arm out as far as he can, as if he were trying to reach them.

Sometimes Barry takes it a step further, seemingly trying to touch the person. 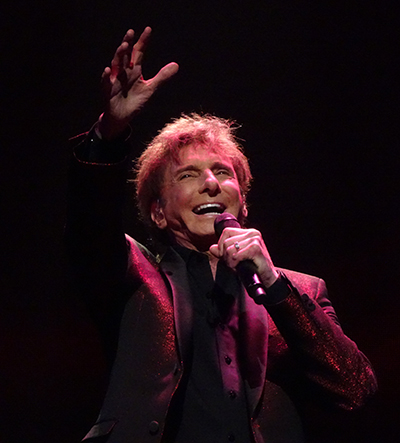 Tonight Barry went farther, still. The expression on his face was so pained, and his "reach" felt so desperate.

And then we got the rock star pose! I'm not sure my heart can take it! Ha! 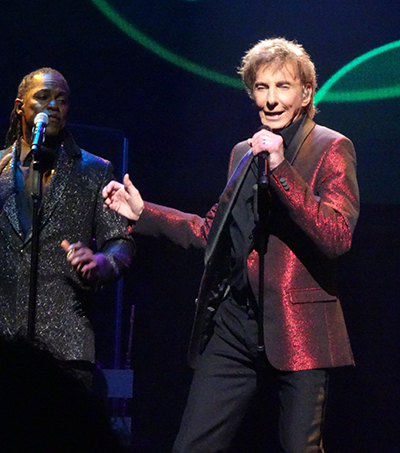 Weekend In New England was beautiful. I caught myself staring at that new background with the moon and the rippling water. That is SO beautiful! 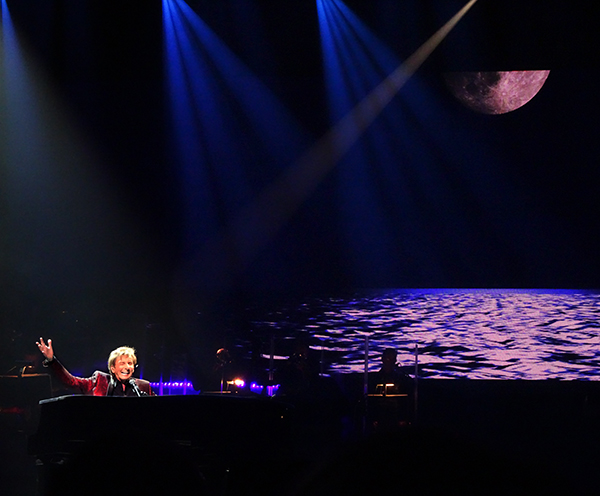 I had to share this, just so you can see how great it looks.

Barry got a lot of ovations tonight. A lot of big ovations. He got one for WINE, as well. He appeared to be very touched by it. 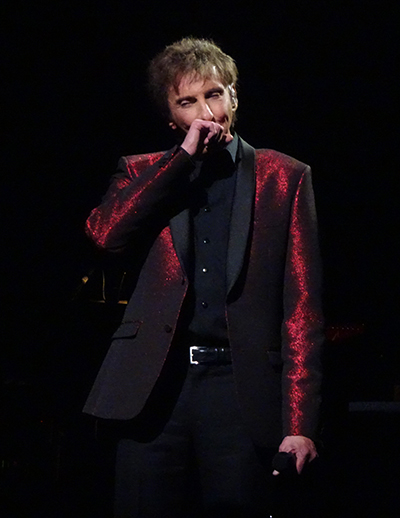 There's a lot of great lighting in this show, from the very beginning. One of the songs has awesome purple spotlights shining down on Barry at the end. I'm trying to remind myself to not miss catching that at one of the last two shows. Very beautiful.

Someone recently said they felt there was too much emphasis on the lighting. Well, if Barry weren't there right in front of us, there would be no reason for the lighting. A show with nothing but flashing lights would be boring. But the lighting does enhance the show. I guess I'm tuned into all the sensory aspects. If I'm seeing Barry in front of me, with his voice sounding so fantastic, and the music so rich and full that it seems to have a tactile quality, and then all of that punctuated by lighting effects at the appropriate moments - that feels like a little bit of heaven to me.

And how can you ignore lighting like this? (from It's A Miracle) 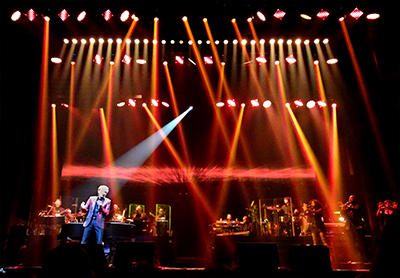 From this angle, it most definitely looks like a heart!

And the fireworks. Much more clear and vivid than in Vegas.

I think the sound was even better tonight. I heard extra musical moments during the songs. For instance the sound of harp. And the flute! This is the first time in all of Barry's shows that the sound of the flute jumped out at me. The orchestral sound overall is just so impressive. These extra moments are icing on the cake. Oh, and acoustic guitar. During one song I thought I could hear the sound of the strings of an acoustic guitar - I looked over at Mike, and sure enough, he was playing acoustic guitar.

How awesome that all of this happened on the night of the SiriusXM recording.

I figured out how to keep from getting depressed during Memory - I just don't listen to the lyrics. I'm serious! I discovered that I didn't need to listen to the lyrics in order to get the full effect of the song. Barry's performance has been so fantastic these last two nights that I can feel the song without thinking about what is being said. I'm a lyrics person - I need to be able to connect with the lyrics most of the time. But there's something about Barry's version of this song, the arrangement, the way he performs it - I feel it.

More lighting, I know - but I love the way lighting looked at the end of Memory tonight. The violet and the blue, the way the band is bathed in violet, all of the spotlights, so clear. And the spotlights appeared to have a blue hue, as well. Gorgeous!

I love this combination of purple and green for Could It Be Magic! This is a different kind of pose for Barry - very dramatic! 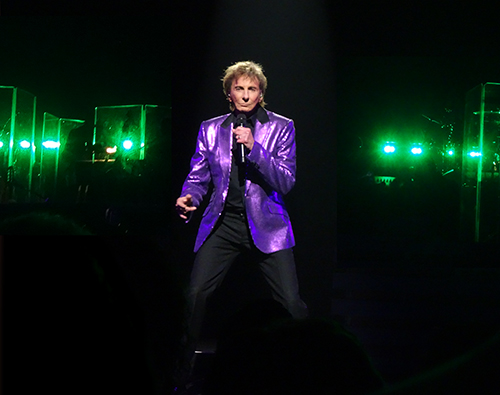 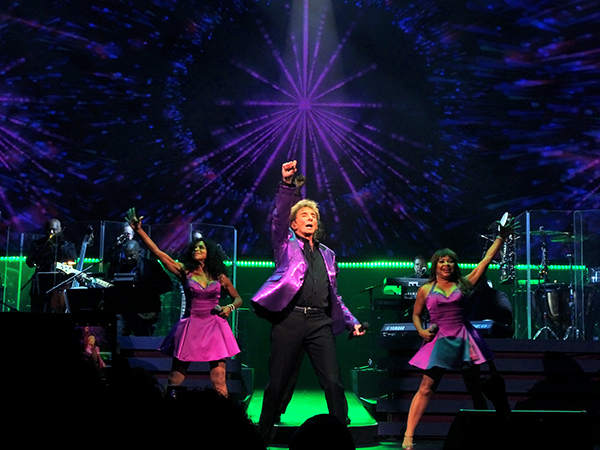 And, oh my - this... Never seen him throw his jacket back like that! Let's just say he made up for the mild version of LLWMI! HA!

CIBM was one of the songs that got a really big ovation. Barry was so cute! 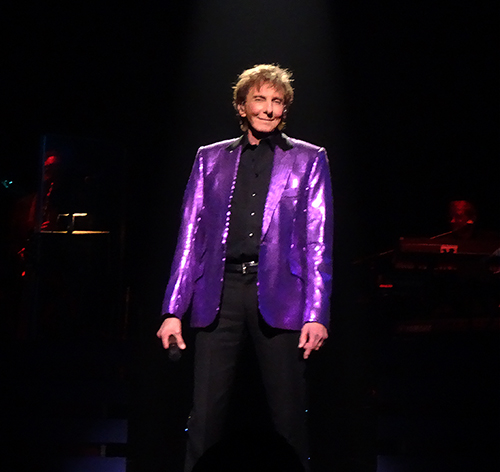 So, at the previous show I couldn't see Barry's face during I Made It Through The Rain because the light was so bright. It appears that the lighting changed tonight. At any rate, it was really interesting, the purple on one side and the yellow on the other. I like this. It's very different. 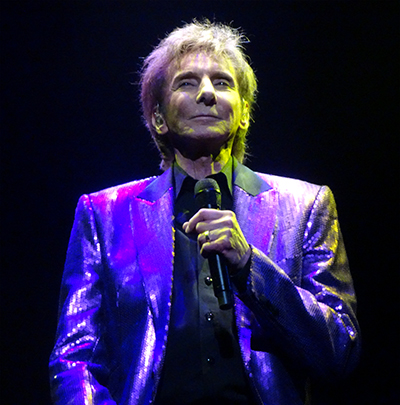 Wow! This was even better than at the previous show! 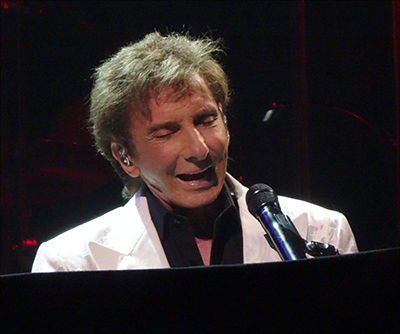 Barry has been introducing his big hits medley by first talking about the songs he's already performed. And then he says, "But wait! There's more!" - or something similar to that. It reminds me of those TV commercials, like the Ginsu knives, where they tell you call in to place your order, and then they say "You get all this for $19.95 - but wait, there's more!" So, I smile when I hear Barry introduce his medley that way. In my mind, I can almost hear him quietly adding, "Only $19.95... No, no, kidding, kidding..."

The medley was fantastic. It amazes me how he can make small pieces of songs feel complete. Well, almost... If you think about it, you want more. But, in the moment, Barry pulls us in for each song. Most medleys feel rushed. But this doesn't - it doesn't feel like Barry is just trying to quickly get through all of his hits. He gives each song piece the attention that it needs. Instead of feeling like a medley, it feels like individual songs. 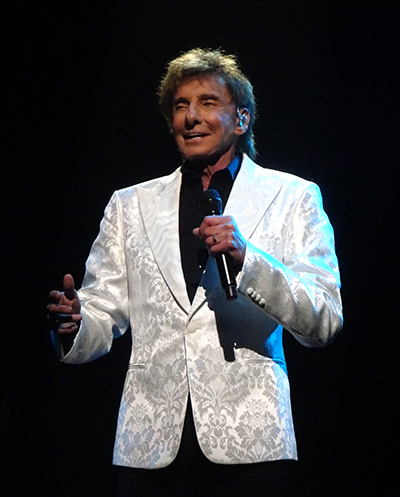 I love the Barry jumps up on the piano to sing I Don't Wanna Walk Without You. I suspect I'm not the only out in the audience thinking, "I don't want to walk without you, either!" Right? 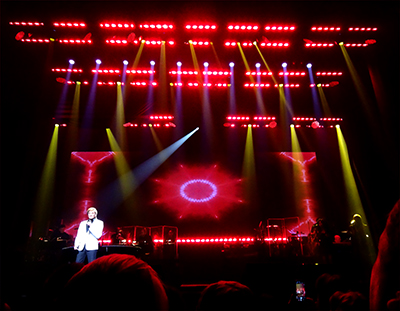 Read 'Em And Weep was fantastic again. I love that song so much. I don't have any photos from it tonight. The ushers kept telling us to take as many recordings as we wanted. I didn't trust them - it's been burned into my brain that we can't take video. However, I did it this time. No one get excited - the video sucks. No, really... The sound is good, but the video is awful. I just pointed it, hit the record button, and never looked at the camera again - I wasn't about to take my eyes off Barry when he was singing REAW. No way! So, he wasn't in focus most of the time. That's okay - it was for my own memory, and it works for that.

Ships was great again, too. This was an emotional performance. His face conveyed the sadness of the song.

Trying' To Get The Feeling Again was wonderful. Another emotional performance. And soooo much passion at the end. I love watching Barry perform this song. 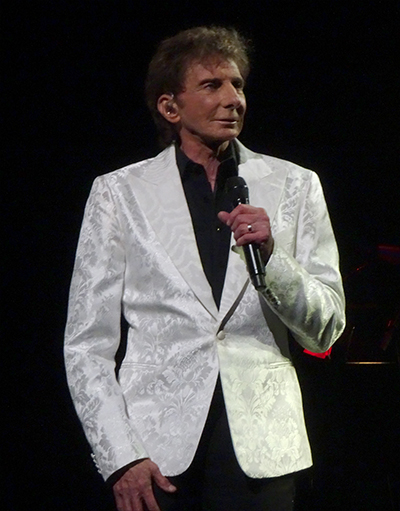 The glow stick added something to the already cool lighting at the end of Somewhere In The Night!

I tried to capture the image of the glowsticks during I Write The Songs. I like this new lighting, with the deep blue. The glowsticks show up so well against it. 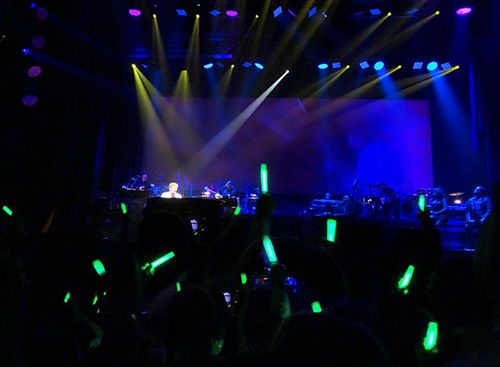 I also like that they aren't using that blue light on Barry during IWTS. I never thought it looked good. This looks so much better. (to me, anyway)

I posted one shot of the end of IWTS with all of the green spotlights. That's really cool looking. But this was, too. 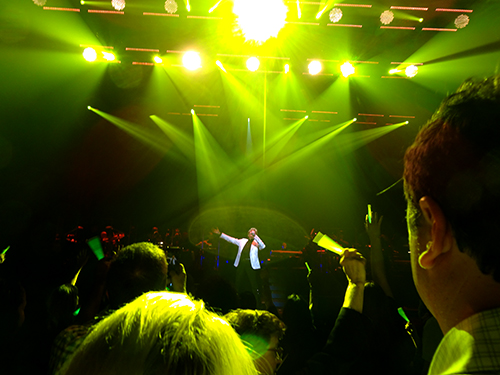 I really haven't been able to get a good view of Barry doing "his steps" in Vegas because there's a shadow over him. I guess maybe from the bridge - it's moving back up as Barry does this part of Copa. I was pleased that I could see him clearly tonight. 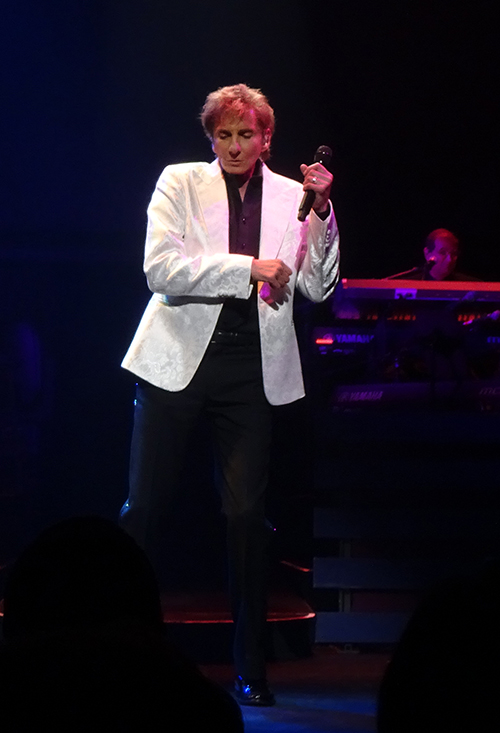 Such a colorful end to the show. The streamers don't get very close to the stage in this venue. But the colorful backgrounds make up for it. 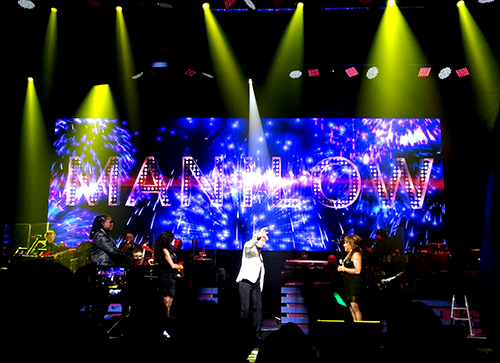 It definitely wasn't logical for me to fly up here to see these shows. Not responsible. Not sensible.

But I'm very glad I did it. These shows were fantastic!

And I'm glad I'm coming for the last two.