Yes, he did! Barry does that frequently!

I was testing out my camera on the show intro. I never noticed how beautiful this part of it is. The album covers go by so quickly, I've never noticed the detail. I might have to try to catch it when My Dream Duets goes by next time. 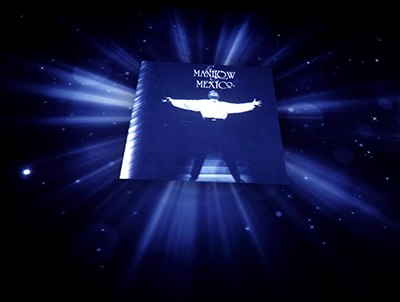 I so wish I had been able to attend more of these shows. I could list a dozen excuses why, but bottom line is I just couldn't do it. At least Im able to swing a few of them. And they're worth it.

This was a fabulous show! The balance between upbeat and ballad was great. The lighting and the set were awesome. It felt like Broadway.

The show is a combination of Vegas stuff and new stuff. Or modified stuff. Just think of a base of the Vegas show, and then several additions and/or modifications. (if I say it this way, it saves me from having to provide a set list - yes, I'm too lazy to do a set list) It felt like a totally new show.

I really like some (maybe all?) of the modifications. For instance, I love this green lighting. The background goes black and then the green lights flash on. Then Barry puts on his purple jacket. I love the color scheme. This is during the uptempo version of Could It Be Magic. 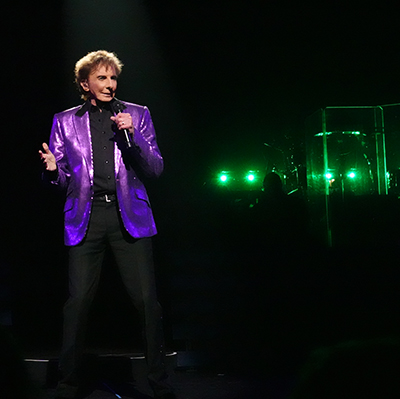 Another modification is that the commercial segment is done at the piano rather than at a keyboard. When they flash the baby Barry album cover, it's right there on the big screen. That was neat. Plus, they flash another album cover, too. 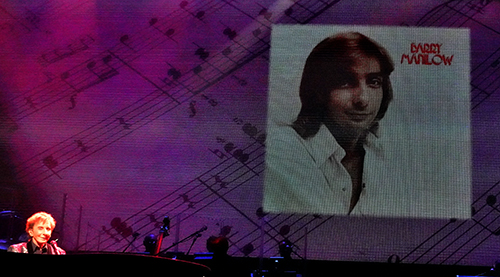 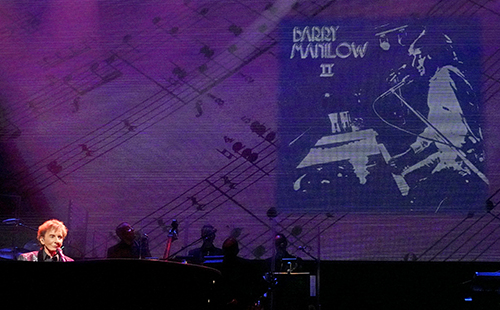 I kind of liked that the commercial segment was performed at the piano. Maybe just because it feels so different, even though it's pretty much the same. Or maybe it's because I get a better view of this...

From the ballad portion of Could It Be Magic that Barry performs as part of the commercial segment, just before going into the uptempo version of CIBM.

I know Ive said a million times that I dont like Memory. And its true, I dont like the song because its very depressing. But, at the same time, I LOVE watching Barry perform this song. He did a great job with this performance. So much feeling.

I love the big ending. And the lighting during the ending of the song was perfect. 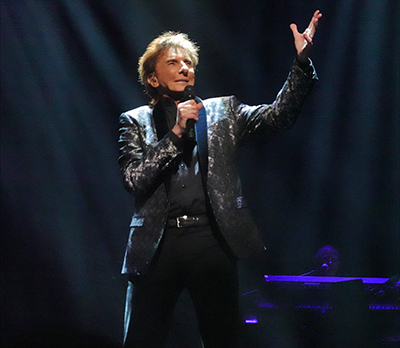 This isn't the best shot, obviously. But it gives you an idea. This is at the very end of Memory. To me, anyway, this gives a Broadway feel to the song. It seemed appropriate. 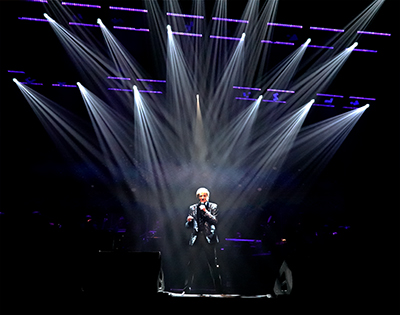 I finally got a shot of the big red thingy during It's A Miracle. I had to come all the way to New York to get the shot! Ha! It definitely looks like a big heart. The image is more clear here than it is in Vegas. 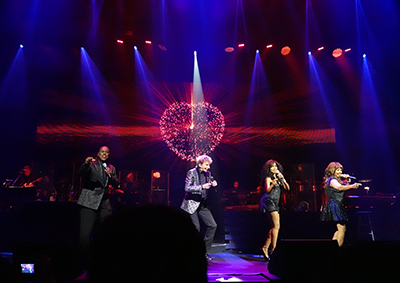 And a lot of the lighting is sharper, too. The colors are similar to the Vegas show, but these lights are crisp. This is a gross exaggeration, but just imagine shining a flashlight on a object, and then shining a laser. Like I said, an exaggeration, it's not that much of a difference. But that's what I mean by "crisp" - the light beam has more definition to it at this venue. And sometimes that makes the lighting more spectacular.

I was hoping to see that blue jacket that he opened this run with. Barry wore the standard jackets tonight. They're awesome jackets, though, so that's really not a loss at all. The differences in the lighting made them seem more vivid. And the detail of the jackets really stood out. 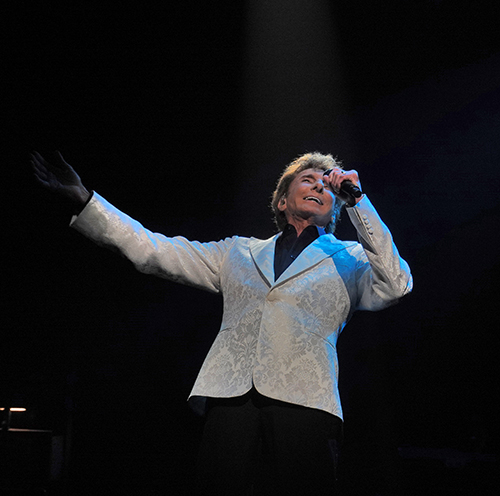 This shot is from One Voice, which is part of the medley. I know the notes and the way I discuss the songs are out of order (but there's nothing "in order" in this review!), but One Voice was spectacular. Barry's voice was so awesome, so rich and full. Gave me chills.

Barry did an awesome job with Even Now. I felt that one! 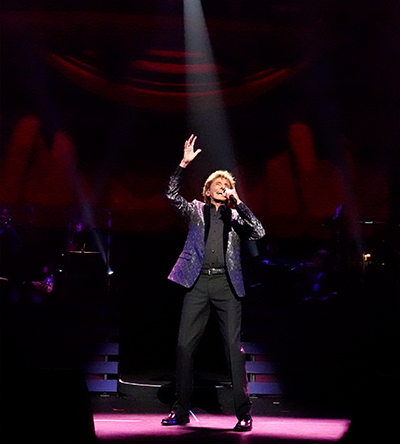 Barry also did an awesome job with Weekend In New England. There was a new background graphic for this - and a great one, too. The moon over the water. It looked wonderful. I actually focused on that so strongly I missed part of the song. This shot doesn't do it justice. 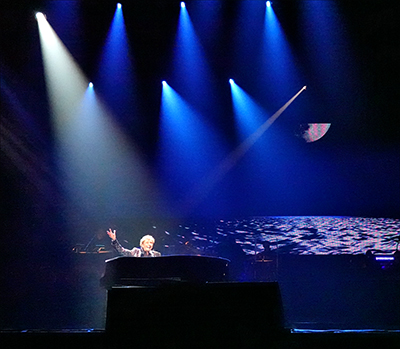 I was thrilled to see that Let's Hang On is still in the show. Just as much fun as ever. For this song, the colors weren't as vivid. But somehow the various designs in the background seemed to be cleaner - they were sharper even though they weren't as colorful. The song was still colorful, just not at the same level.

I loved Barry's performance of This One's For You tonight. I know I messed up this shot by cutting off Grandpa Joe's head. But still, I really like baby Barry in background, right behind today's Barry. 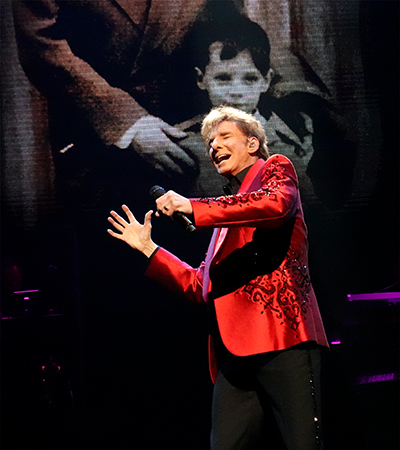 Mandy was wonderful. I loved the way Barry gazed out into the audience as he sang. That felt very personal. Typically he sings out into space - that sounds awful - but he doesn't seem to focus on anything. It's an iconic song, and he performs it in an inconic way - and that works fine. But once in a while he changes it up, does something different, makes it feel more personal. And I love that.

There was also a somewhat touching moment after Barry finished Mandy. I think he's said this in several different ways over the years - it basically has the same meaning - but this felt extra touching to me. He spoke of how he still loves performing Mandy and how it's still special to him. Then he referred to the song as if it were a person, and said he would always love it because that's how he met all of us. It was a heartwarming moment.

I Made It Through The Rain had a different feeling tonight. Can't put my finger on it. But it felt more positive to me. And this is a "me" thing - Barry has always been doing a beautiful job with it. I'm the one with issues. Ha!

There really aren't many modifications to IMITTR, but there were some differences in the lighting. The basic lighting, the color scheme, was the same. But when Barry sat down on the stool to start singing, the white spotlights hit him - and they really washed him out. I looked up above him and the same gold/purple spotlights were shining down - and as I said, crisp - but directly on him were very bright and you couldn't clearly see his face through them. The overall image of the stage at the moment was beautiful. Kind of a mixed bag there. 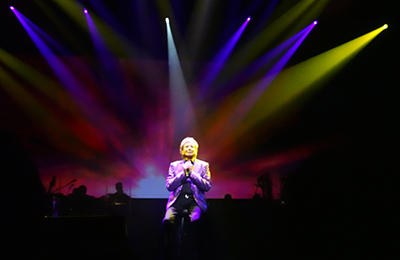 But there were clear moments when you could see Barry. I love his hair. (LOL! Okay, that has nothing to do with the show - but I do!)

Barry's voice during IMITTR... Well, wait, take a step back...

Barry's voice was fabulous during this show. The entire show. And the sound overall was fabulous, too.

Anyway... Barry's voice during IMITTR was very soothing and comforting. I know I'm not the only one that feels this way, but sometimes the sound of his voice can send waves of calm over me. His voice during IMITTR was like that tonight. Typically, I would see facial expressions that would take the performance a notch higher in terms of generating that feeling of "hope" that has become associated with this song. I couldn't really see his facial expressions, so that aspect was lost. But his voice alone conveyed a lot of the feeling.

This shot was taken after the lighting got less intense. This is very similar to what you see in Vegas. But it looks so much better here. 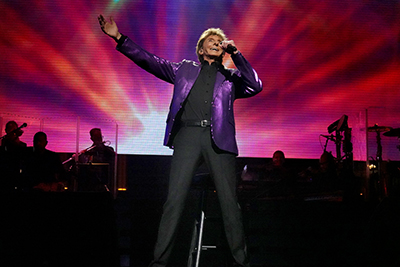 Im going to admit that I was a little disappointed to hear that Lay Me Down and Keep Each Other Warm were out of the show. But I was thrilled to hear that Read 'Em and Weep was going to be in the medley. And to be honest, I didn't even miss those other two songs. The medley was awesome!

I just loved watching Barry perform KEOW tonight. I love that song - its one of my favorites. And I love Barry's interpretation of it, especially the way hes been doing it in recent years. I like the controlled anger of it. I was sitting right on the edge of that range where Barry's eyes can be seen - so I couldn't see as much, but I could definitely see the flash in his eyes as he got more passionate with the performance. I love that!

Ships is another favorite of mine. I was surprised by the graphic in the background. Beautiful and very appropriate. It was a nighttime scene of cliffs by the ocean and either some stars in the background or possibly lights from the city way off in the distance. It looks more like stars to me. The single spotlight that was shining on Barry actually had the appearance of the moon shining on the water. Besides illuminating Barry, it also looked like it was illuminating the sea in the background. It was gorgeous, very striking. 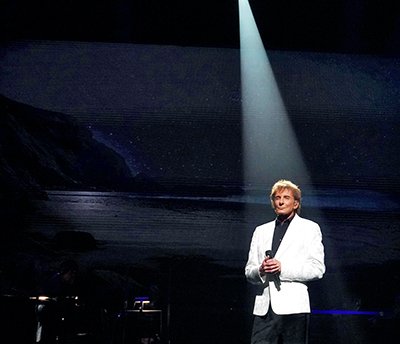 Barry put a lot of emotion into Ships but it was also subtle. It was quiet emotion. It really tugged at the heart.

Tryin' To Get The Feeling Again was fantastic! Barry was subtle at the beginning of this song, as well. It was very obvious emotion but it was quiet. You could see the struggle in the character as he talked about trying to get the feeling. Barry would pace, and he would clench his fist, and then unclench them. The facial expressions were spot on.

Then Barry walked to the piano to finish the song. That's where all of the passion broke loose. He was singing with so much emotion - fists clenched, singing at the tops of his lungs. I love the power and the intensity that Barry has when he sings this portion of this song. 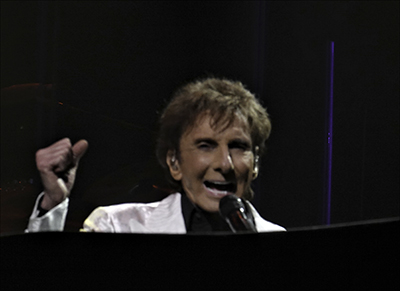 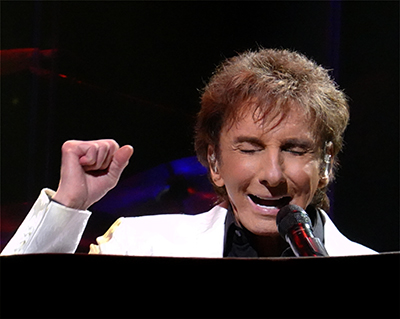 Somewhere In The Night was in the medley. There's new lighting for SITN. The deep blue is gone. But its been replaced by these beautiful white spotlights. 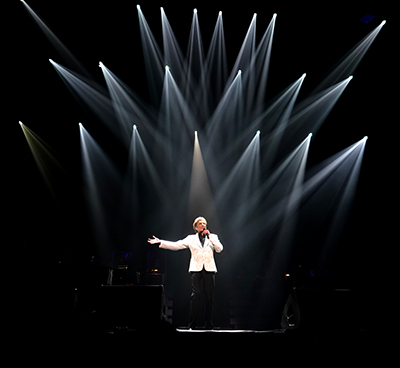 In general, I dont like white spot lights because, well, they bore me. Sorry! But these did not bore me. They were so precise, crisp and clean. And coming in from all the different angles was a nice touch. I really like this.

Then at the end, they change the lighting again. There was a blue cast to it. It was kind of dark it looked really nice. Get fit the tone of the song and created a mood. Kind of like somewhere in the night. The poor little camera got confused and could not focus properly in that lighting. Trust me, it actually looked much better than this. 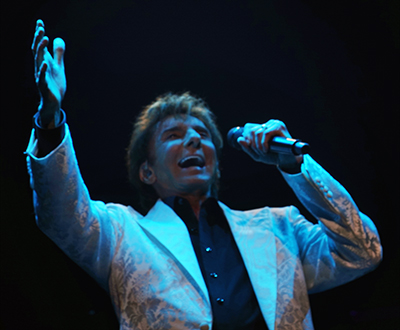 There was an unfortunate incident toward the end of the show. Someone threw a bra up on the stage. But, as if that weren't enough, they hit Barry with it when they threw it. That goes beyond rude and disruptive. Barry went on as if nothing had happened, only slightly pausing to look down at it. But if something comes flying at me from out of the audience, I would be startled. What's wrong with people?

The lighting at the very end of the show was interesting. This is at the point where the curtain has already started to come down. Just enough light to make Barry visible. A different kind of Shadow Man effect. 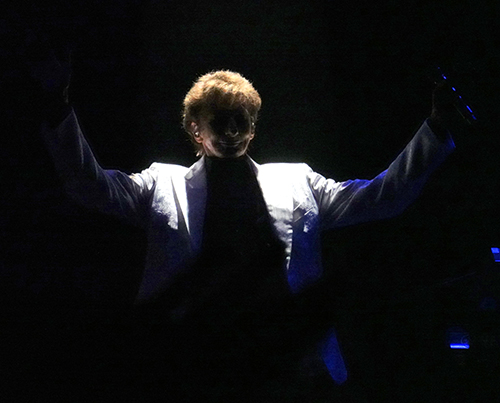 What a wonderful show. Barry has outdone himself again.