The first Christmas show of 2021 was great! And Lola was a reindeer! It was a night full of surprises! This was a fast-paced show. As always, it was a mix of Barry's well-known pop songs and his well-known songs from his Christmas albums.

I don't want to give too much away. So, if I sound vague at times, it's deliberate. I don't want to spoil anything for those who like to be surprised.

The show opened differently, but I like it! The set is very pretty. Throughout the night there were different types of lighting, different levels of brightness. 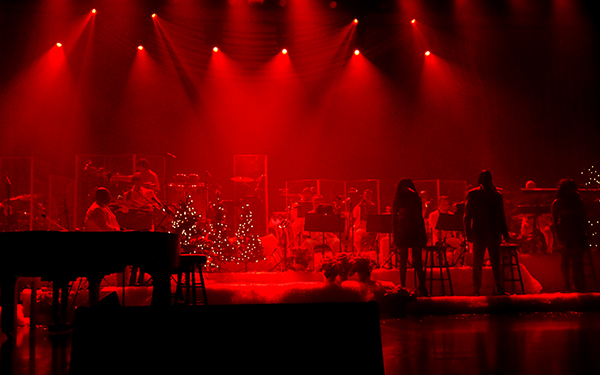 I made a comment on Facebook about not particularly liking some of the lighting during the show. I loved the overall color themes. Some of the lighting effects were similar to what we saw with the previous incarnation of Barry's Vegas show. And there were some really impressive moments that while similar to previous shows, they were also enhanced. There was one song where the lighting looked as if it formed a half circle on the stage - that's how the spotlights were shining down. 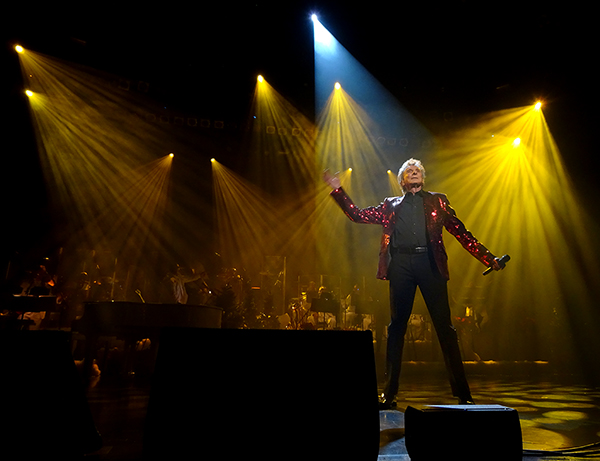 I really liked a lot of the lighting effects. What I didn't like as much was that there were times when Barry wasn't well illuminated, he was in the dark. And I undestand that's necessary some times. For instance, this is Barry's big entrance at the beginning of the show. 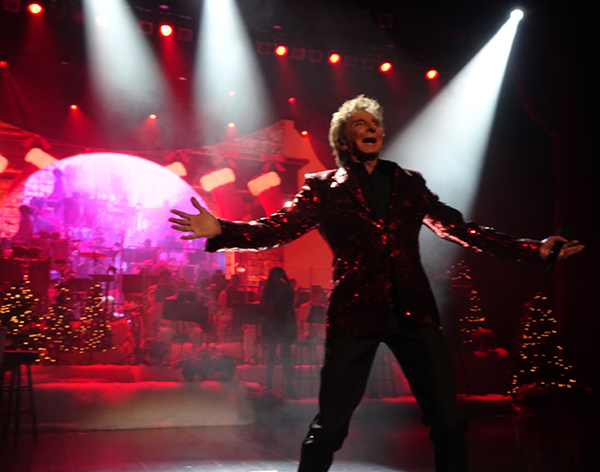 Later, it appeared that the spotlight was having a hard time keeping up with Barry. We've seen that happen a lot, haven't we? Barry doesn't just stand in one place to sing all night long - or sit at the piano all night long. Barry Manilow is the Energizer Bunny's role model.

It's A Miracle had a completely rewritten set of lyrics tonight. I could not even begin to tell you what they were. I couldn't possibly remember all that! But the new lyrics were fun, fit in well with the show. And Barry threw in the bit about being "unwrapped." That line was met with some audience approval.

Christmas Is Just Around the Corner was right there toward the beginning of the show. Very fitting. And that's my favorite. It set a great tone for the rest of the show. Lots of colorful lighting during this one. 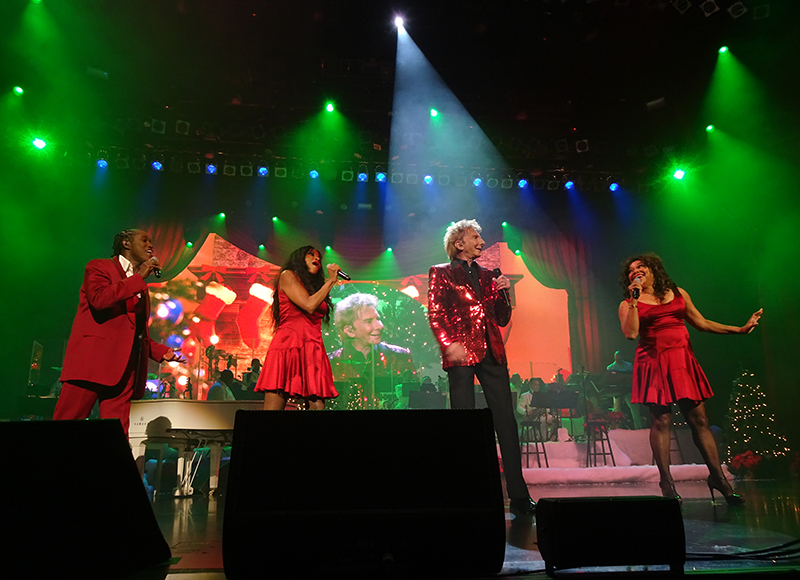 We got a portion of Somewhere In The Night as part of a medley. I love that one. Definitely sigh-worthy - and I think I heard a few of those sighs. Beautiful blue lighting. I seem to recall that's the same color they've used in the past, although this time the spotlights seemed more well-defined. A beautiful effect. 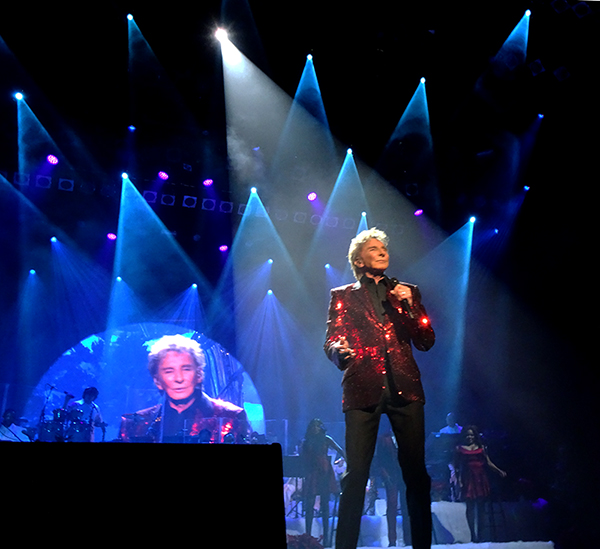 I didn't know they had recruited Gomez Adams to play the part of Mr Smiley Face! Ha ha! I didn't notice this while I was watching live. But somehow the camera managed to give Mr Smiley Face a moustache. Too funny! I've got one photo from earlier in the song (this is Can't Smile Without You), and you can see that the line markng< the upper "lip" is slightly heavier, but it doesn't stand out. For some reason, though, this particular angle created a moustache, and I have several shots of it looking the same way. 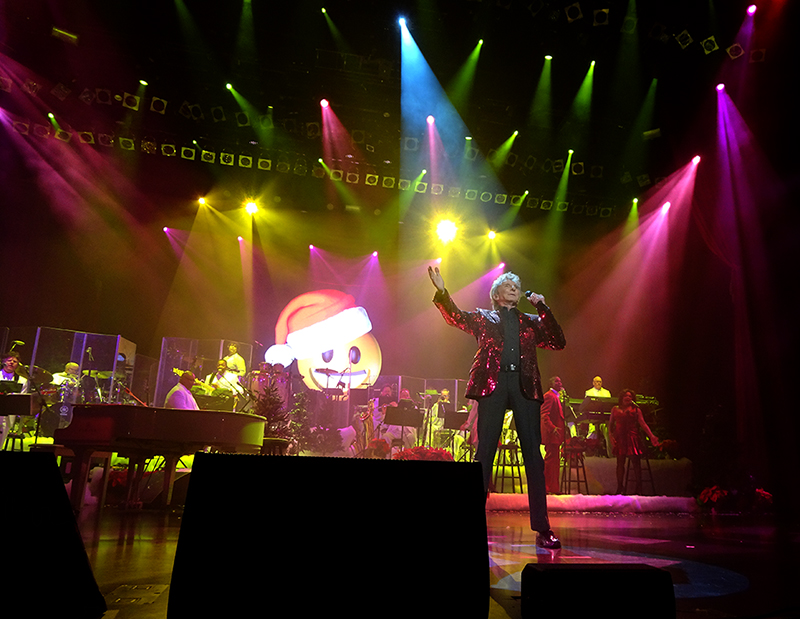 Looks Like We Made It. I love it when you can see the emotion that Barry is putting into a song. 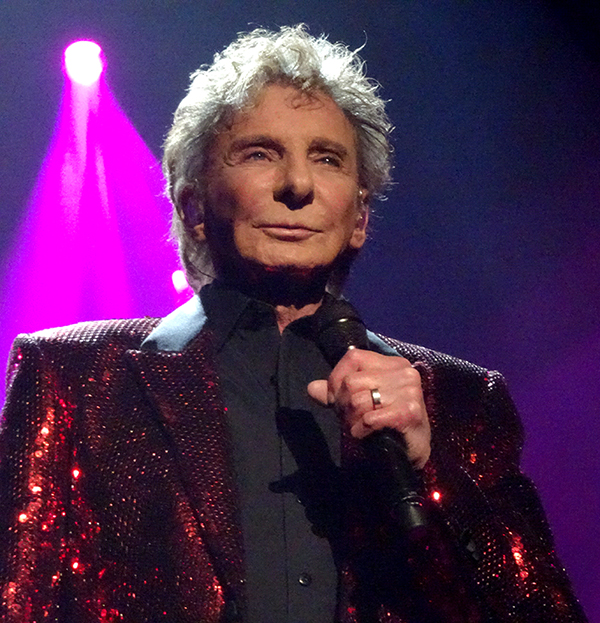 This performance wasn't as emotional as we've seen in the past, though. Or maybe I should say that is was a solid, serious performance. My interpretation was that Barry was interested in being true to his performance, but not interested in trying to sway the audience in one direction or annother. I felt the same way with all the ballads. 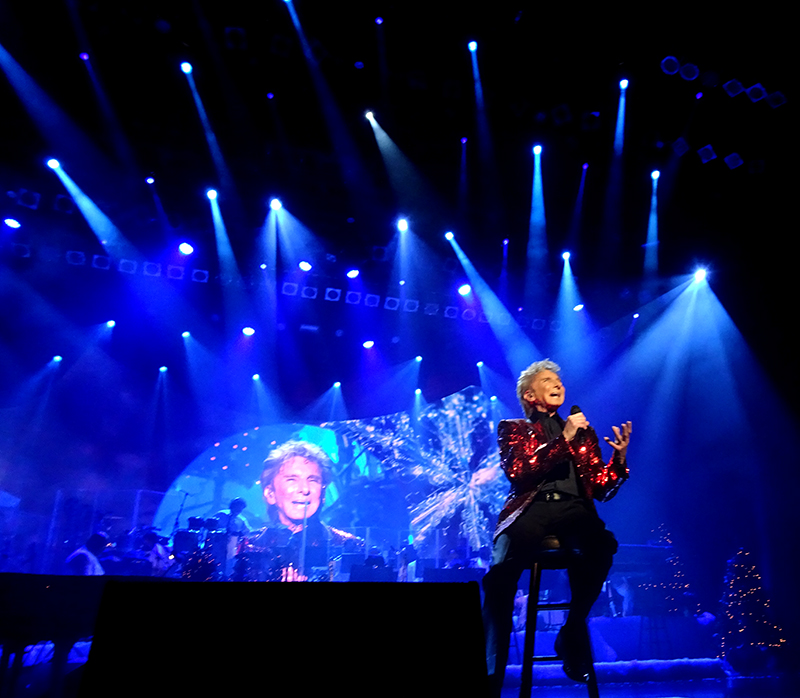 I loved his final pose during the song. So expressive! And yeah, the lighting did some things I've never seen happen before. But at the same time, I actually kindof like it. 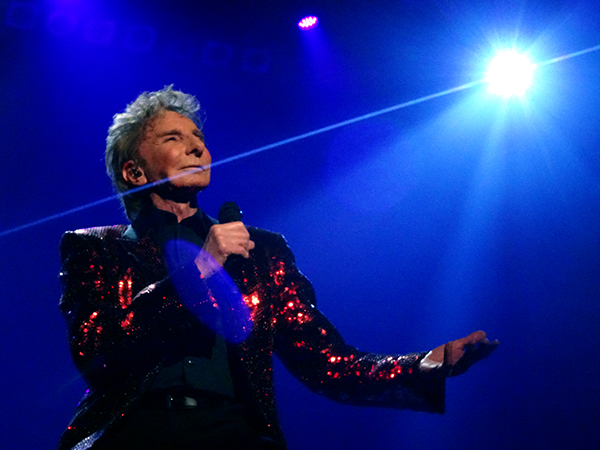 This is an example of some things that I saw with the lighting in several spots during the show. And, of course, this is my perception from my audience - I know nothing about lighting - it's just how it looked to me. It seemed as if there were some additional spotlights that were lower, closer to the stage, than I've seen before. So, they illuminated the stage, and looked great overall. But sometimes it felt like one would hit me right in the face. And when those lights were shining so brightly, then Barry wasn't very well illuminated. That's not meant to be a negative - well, ok, I guess it kind of is - we always want to be able to see Barry, we kind of like the guy. But my point really is that the lighting feels different, and it creates some interesting effects.

I know I've mentioned in the past that sometimes the lights seem to take on a physical quality - sometimes the light/color is so dense, the rays of light almost look solid, as if you could touch them. That's how the half circle I mentioned earlier looked. And I saw that in a couple of my shots, where the beam of light actually obscured Barry's hand, for instance. In this photo, it looks like a blue laser piercing Barry's cheek.

Again, it's not meant as a negative comment. The creative side of me actually does like the lighting in this shot. And the rest of the comments are more about intellectual curiousity - my brain wants to know how that's possible. I'm sorry, my brain has lots of questions about things. 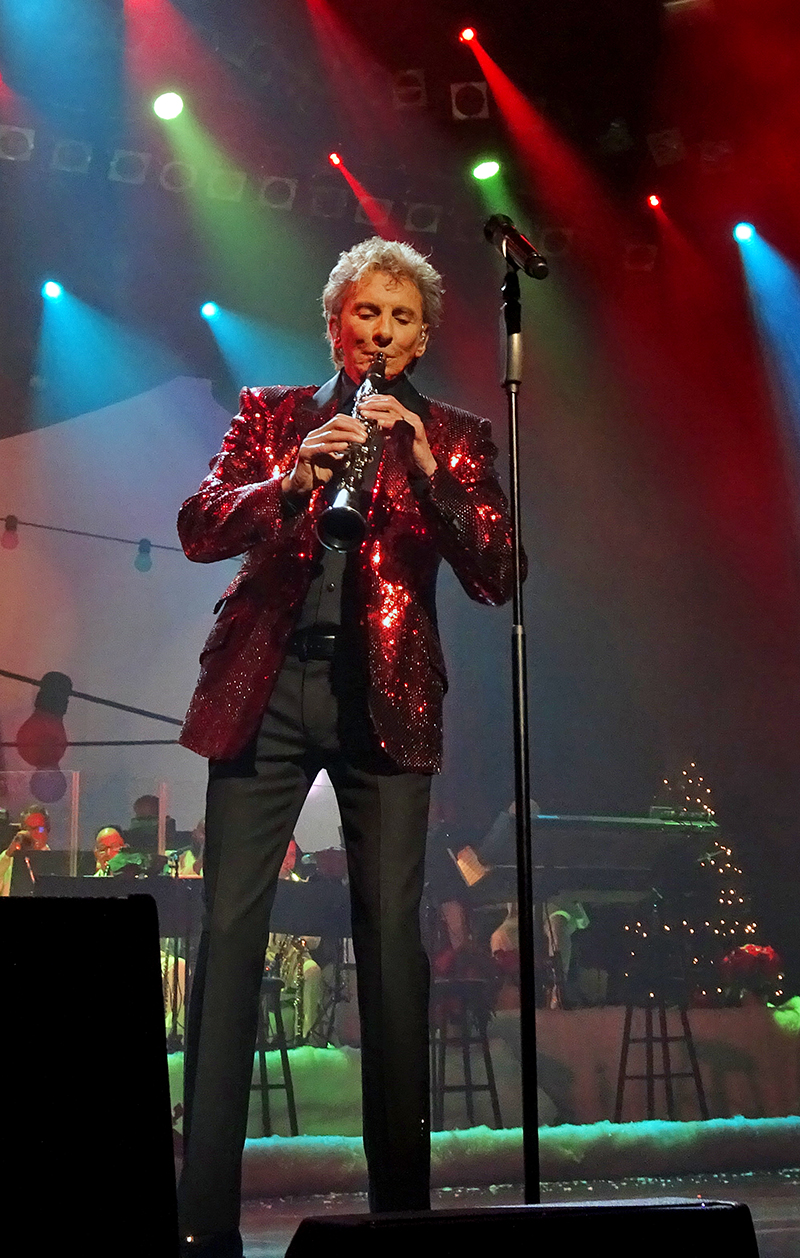 Barry got a big ovation for Even Now. Again, not as passionate - more true to the lyrics, but not trying to really force a reaction to the lyrics. 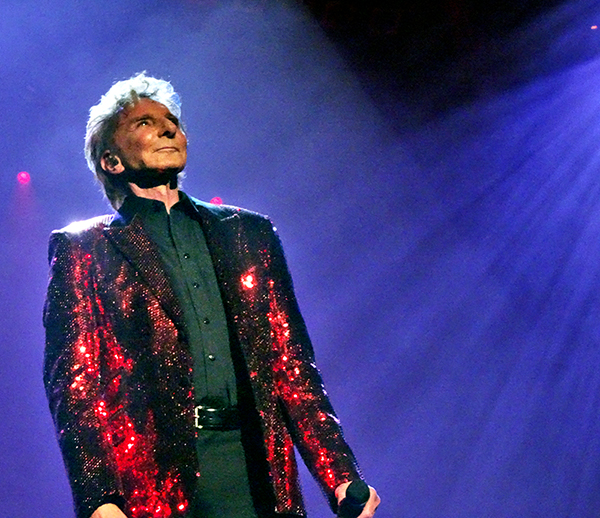 I was pleasantly surprised to see that Let's Hang On was still in the show. Will always be one of my favorites. I was sitting in the perfect spot to capture rockin' Barry. Love it! 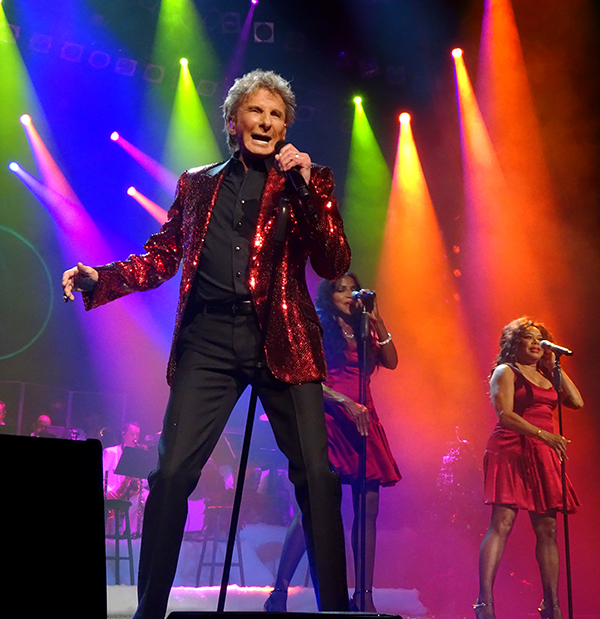 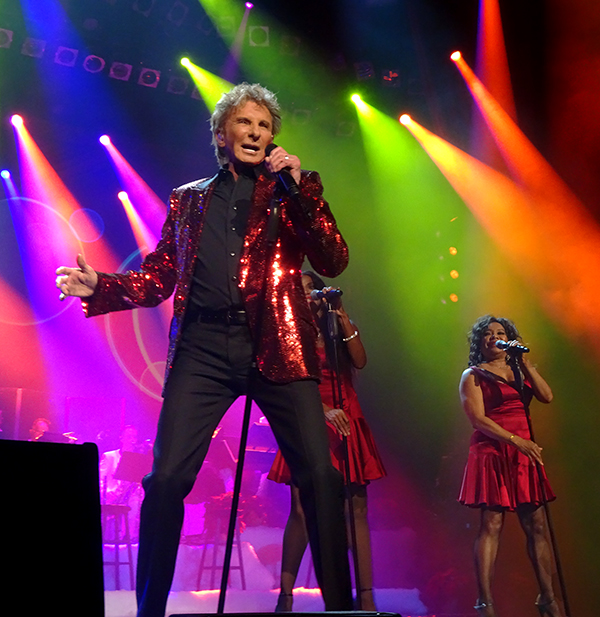 The piano was in a different position from what it normally is during the Westgate shows. This is from Weekend In New England. No shimmering floor or big moon, but the color of the lighting is still the same. A lot of people did yell out during the song. Barry seemed to want to move forward with the song, in keeping with the tone of more serious performances. But he did briefly stop to say, incredulously, "Still??!!" Yes, Barry, STILL. In fact, FOREVER!!!

I'm really loving this new jacket that Barry is wearing for Mandy and I Write the Songs and Copa. 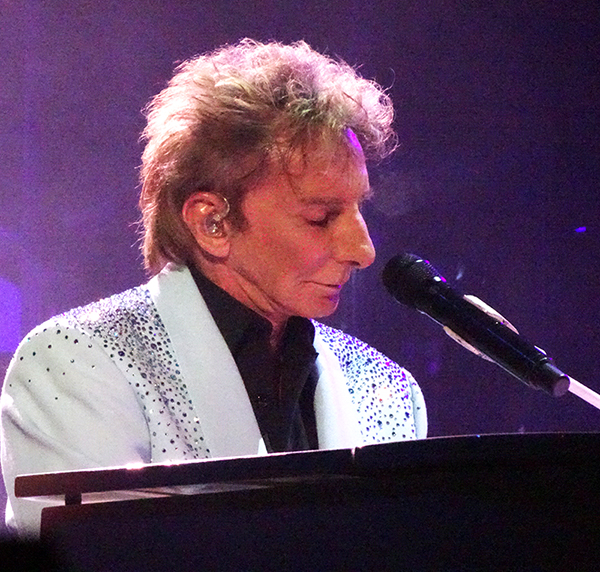 I much prefer this lighting for Mandy. I've never liked the blue color on Barry's face. I like the blue background overall during the various songs, but not that light blue color concentrated on his face. This is awesome.

And this is during I Write The Songs. The light is still blue, but it's not that same color. This looks great.

This is one of the stage views with a different color scheme. 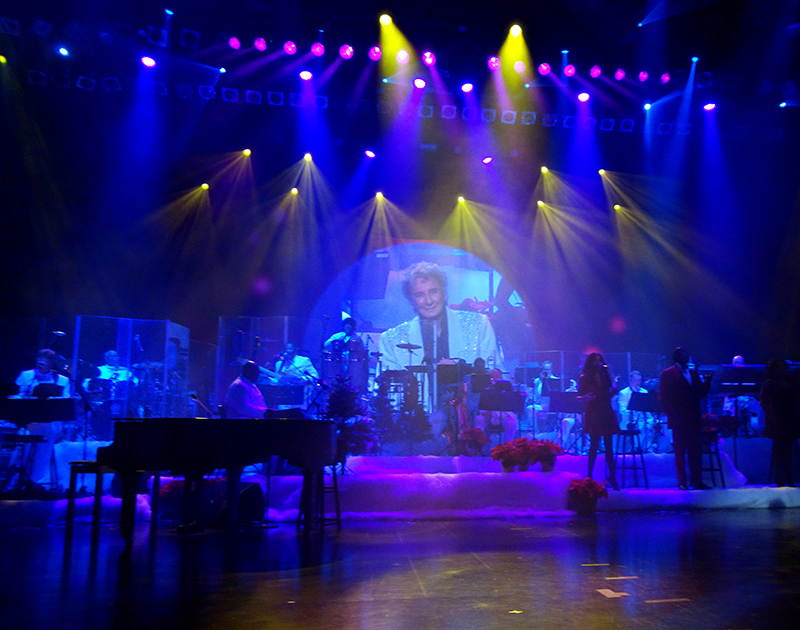 And the final note of IWTS. Such beautiful lighting. And Barry looks so perfect with that as a background. 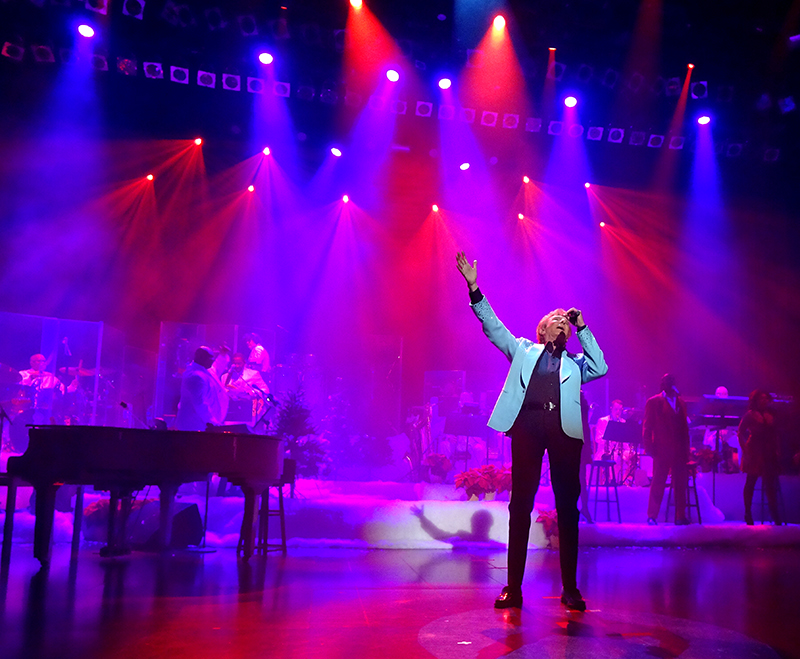 Barry's band is dressed all in white. They look snazzy. 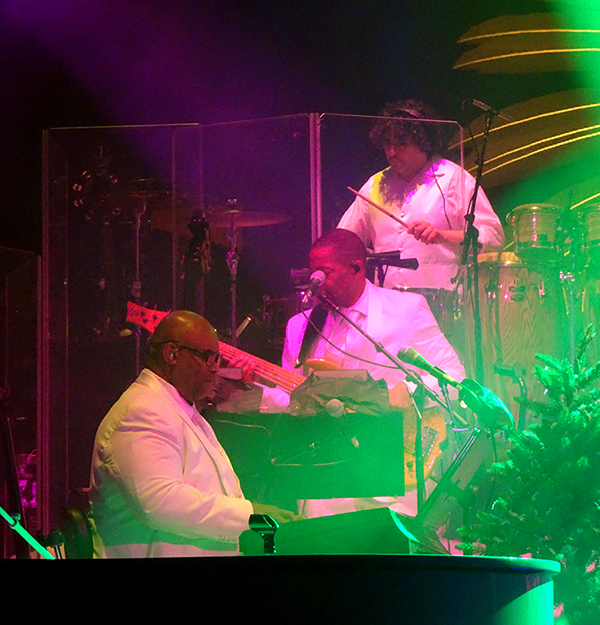 And, it's not just Barry's regular band. There are also several other musicians on stage with them during these shows. Mostly horns - or maybe all horns - I couldn't see everyone clearly. 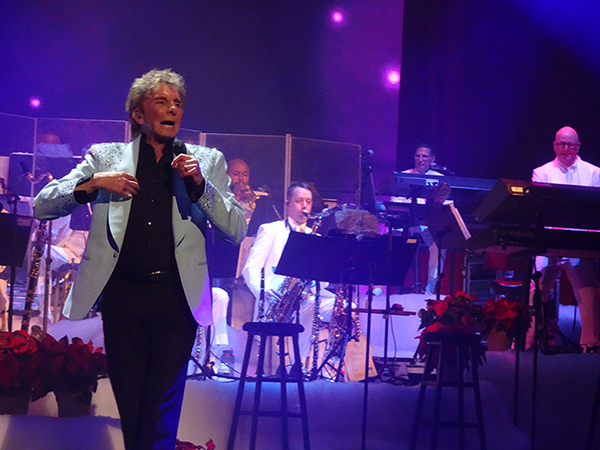 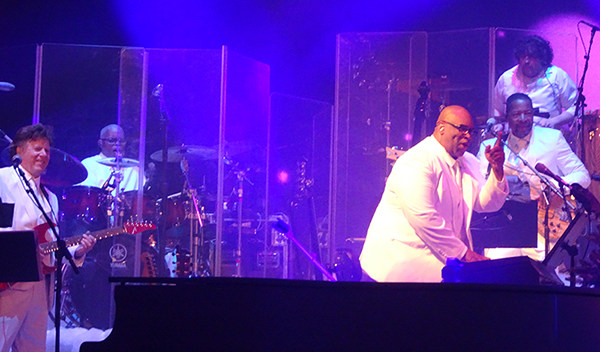 And another view of the stage, this time with the Barry Christmas logo. I love that logo. 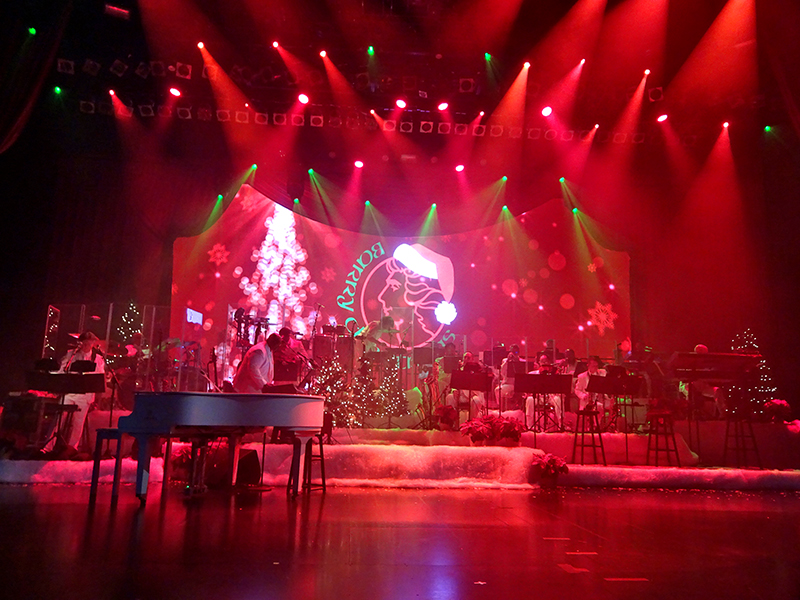 Barry in his tux. So handsome! 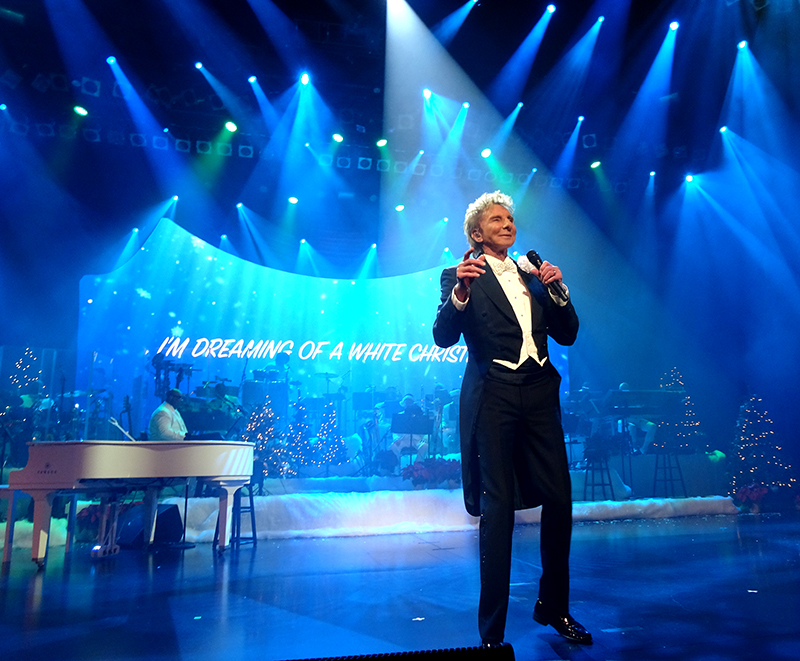 And it snowed tonight Well, a little bit. More like a Texas snow - not a Texas Panhandle snow - a Central Texas snow. Except for February of 2020. If it ever snows like that again, I'm packing up all of the critters and moving to Ecuador. Dana's Caravan of Critters.

Anyway, it kind of sort of snowed a tiny bit. But not enough for me to be able to get a picture of it. Instead, I got shots of Barry in his tux - which we'd rather have anyway.

And, of course, there was Santa Claus, and the kids' choir. The kids got covered in streamers.

And the final bow. Really a great show. One of his best Christmas shows, I think. 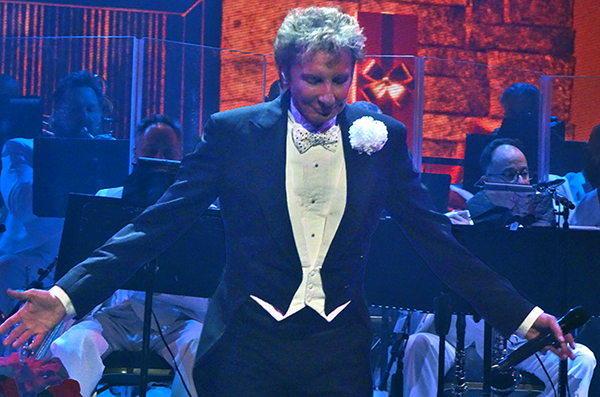