There was a new song in the intro music before the show. That Elvis song (sorry, never liked it) was replaced by All Over The World by Electic Light Orchestra. (thank goodness for Shazam!) And it was pretty loud, too. That was so cool! I felt like I was at a rock concert! Okay, so the song is more pop than rock - but it's still very upbeat and gets the audience in a music frame of mind.

Barry seemed happy with the crowd being so enthusiastic. Look at this grin during Daybreak.

Barry really used his eyes to sell Looks Like We Made It tonight. He owned the audience from the first line of the song.

Usually I'm looking for the tone of LLWMI. I lock into the interpretation-of-the-night for the song by the cues that Barry's tone provides. But tonight, I have no idea what the tone of the song was. Or the lyrics. Or the music.

I just saw this! 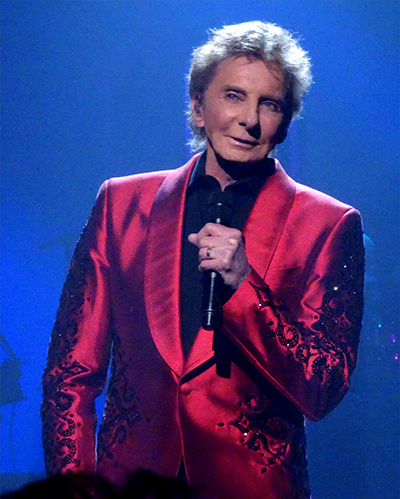 Ha! Like I said, the eyes took control of everything! 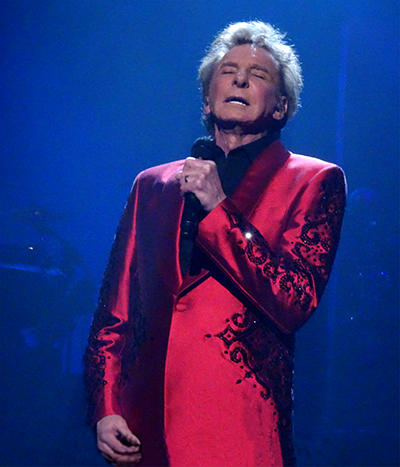 The audience was very enthusiastic about Can't Smile Without You. 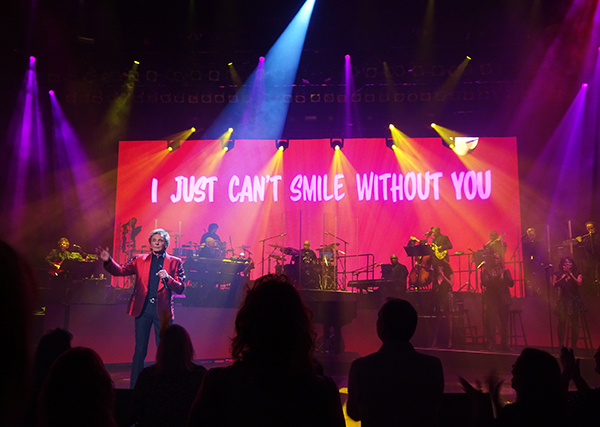 This One's For You was more expressive tonight. There was nothing extremely emotional or passionate about it, but you could feel Barry. Even at the beginning of the Baby Barry bit, he seemed more expressive. Love the thumbs up! 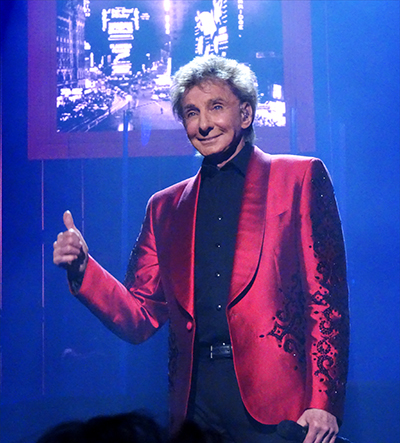 The Record Your Own Voice graphic is so appropriate to the song. I mean, to Barry's version of the song. 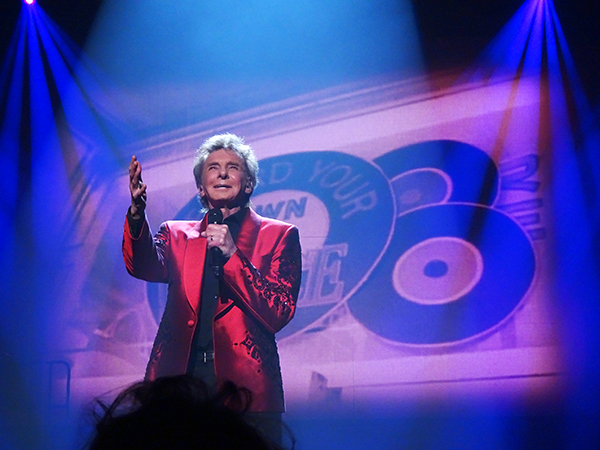 I love the Shadow Man view. I don't think I've ever noticed Barry bowing his head before. I love it! 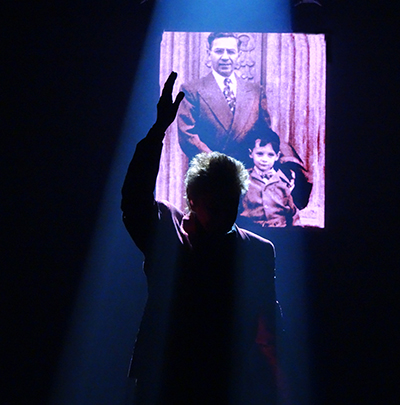 The lighting was giving me fits during This Is My Town. Well, actually, throughout the show. Strange, because when I sat in almost the same seat a few weeks ago the lighting was much better. Everything seemed so washed out tonight.

But Barry's performance wasn't washed out. He performed the song as if it were brand new to him.

Washed out colors, but I still love this pose at the end of the song. 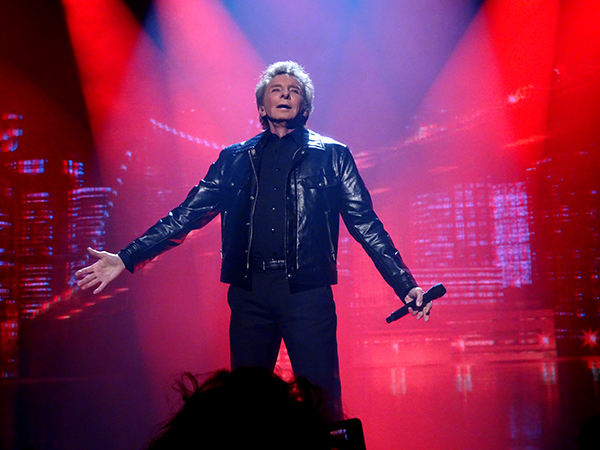 Even Now was beautiful. I'm not feeling as much sadness in the song - and I think maybe that's just me. (I'm too busy being depressed over I Made It Through The Rain - LOL!) But Barry is still communicating the emotion in the song. I kind of like when he has these serious, contemplative expressions on his face. 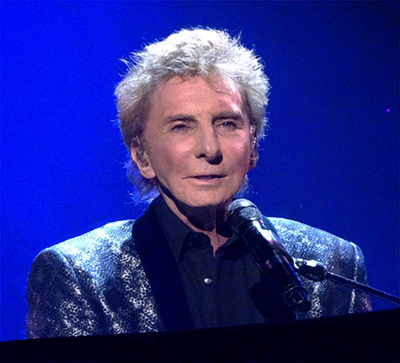 Let's Hang On was a lot of fun. Barry seemed to be having a lot of fun with it. Some different expressions and gestures. 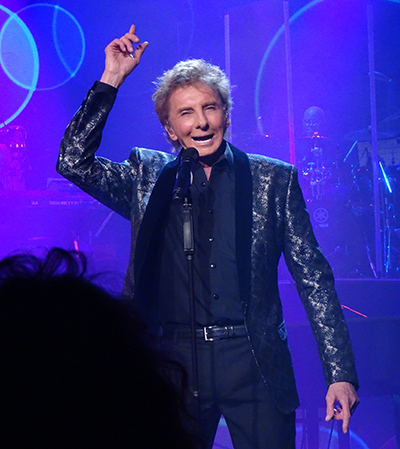 I cut Barry half out of the photo, but at least you can still see his expression. I like this interaction with Melanie during the first part of LHO. 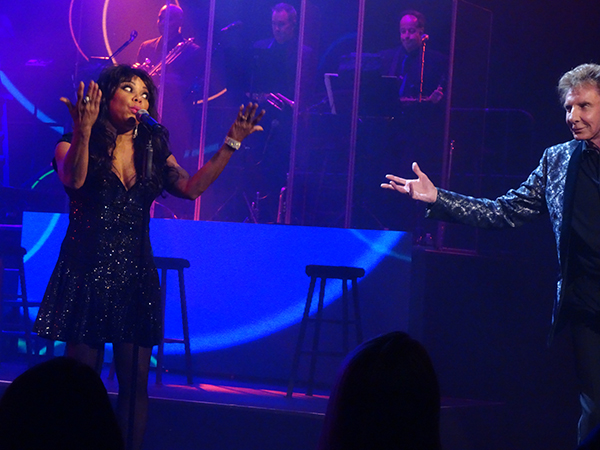 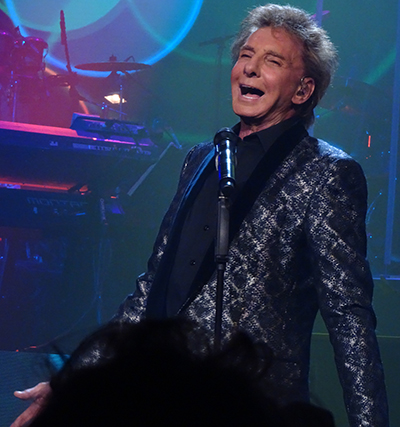 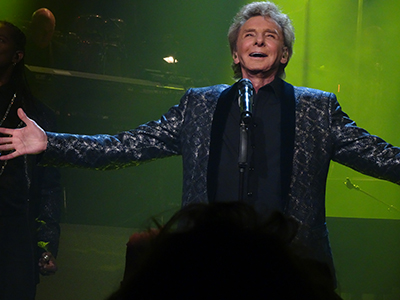 Weekend In New England was even better tonight than last night. Barry had some really dreamy expressions on his face. 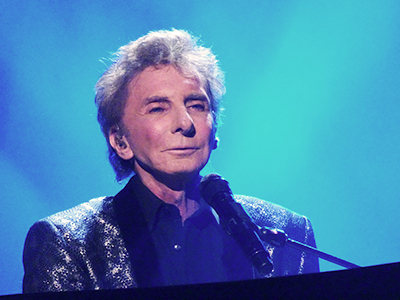 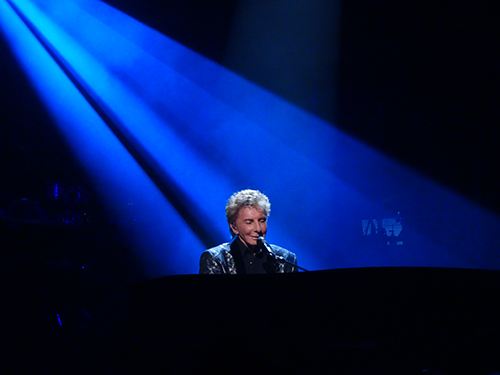 Since it was an enthusiastic audience, it was no surprise when they yelled out during WINE. I was a little surprised that Barry stopped to acknowledge it, because he doesn't do that often anymore. He just did his little "thank you" - but then he paused and said, "STILL?!!!" And then he started laughing - and laughing and laughing. It was so cute!

And yes, STILL!!! Always and forever! LOL! It doesn't matter if he does end up stooped, bald, and coughing up phlegm - we're still going to be seeing the same guy that stole our hearts a million years ago.

Just because - because I like the view during the commercial segment. 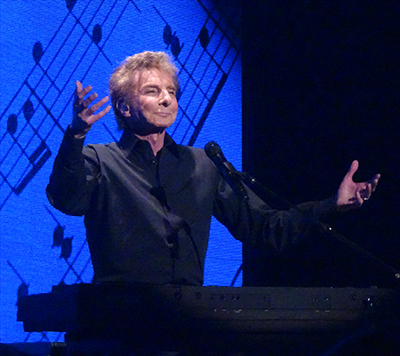 This was a really cute moment as Barry was playing the intro to Could It Be Magic. He suddenly looked up at someone and gave them this adorable expression. 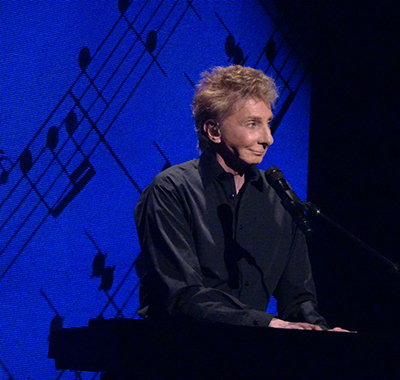 Barry seemed ready to have fun with the uptempo CIBM. He was all smiles from the beginning. 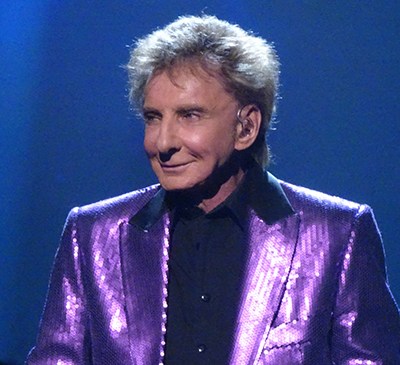 And the come hither looks he gave Melanie! Who would say no to that?! Ha! Love it! 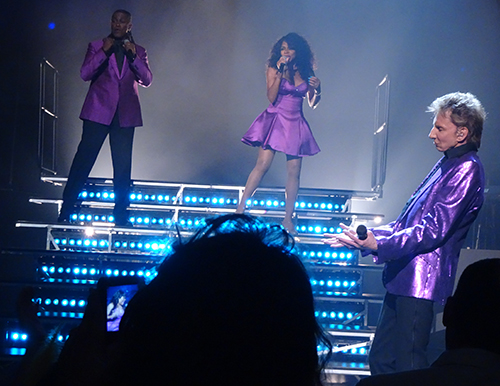 And then even more smiles. I love it when he's like this! I guess the audience response has something to do with it. But, then again, when he's on fire like this, how could any audience not react?! 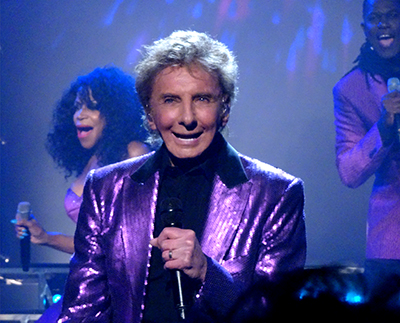 Far too many heads in the way to document most of the song. But I got a partial BAM.

Barry ended the song with big smiles, too! He looked SO happy! And WE were so happy! I'm sharing these two shots even though I blew it - LOL - because you can at least see the smiles. 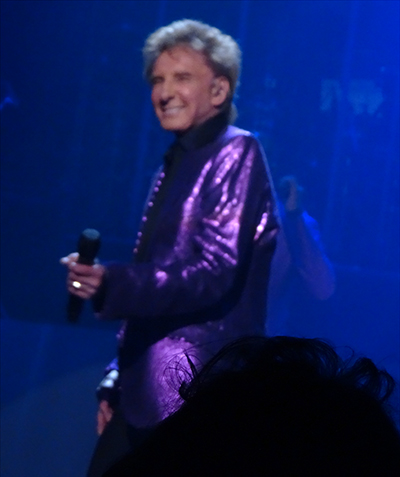 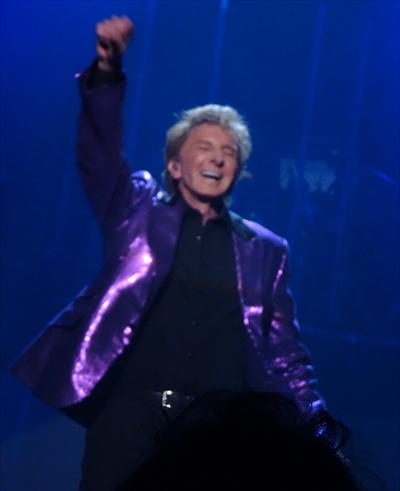 I didn't feel like slashing my wrists tonight during I Made It Through The Rain. I guess there were just too many smiles from the show I was seeing - or maybe it was the smiles on Barry's face. Either way - I loved what Barry did with his interpretation tonight. 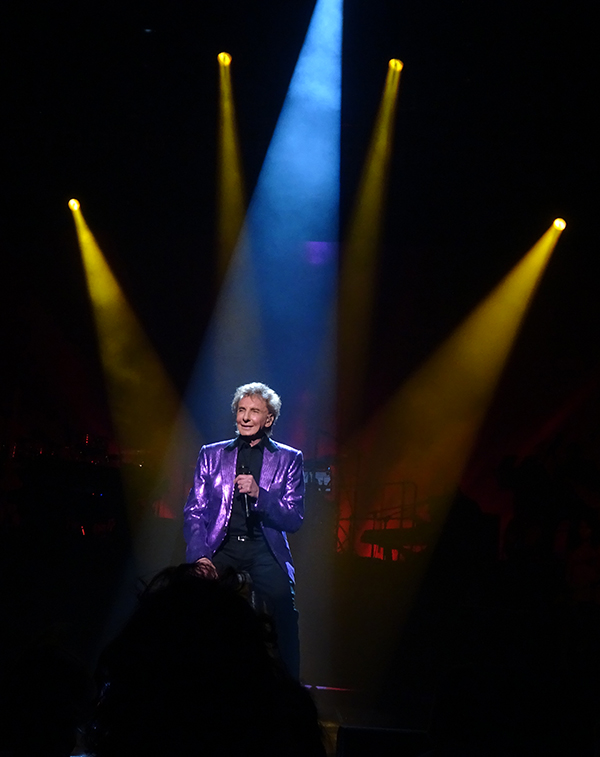 Mandy was again a fantastic performance. Both emtional and intense! 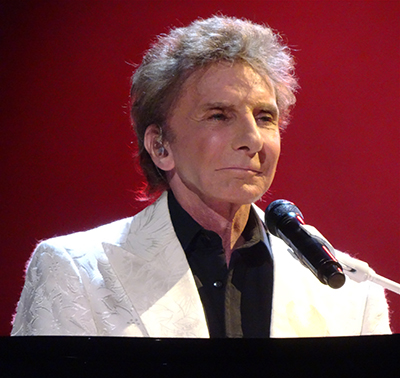 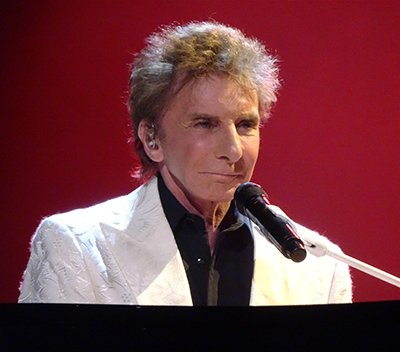 And we got a ton of smiles during I Write The Songs!

It was funky version of We Are Family tonight. The audience got into it. And Stan was playing some great bass.

Barry was still offering hugs during Copacabana! Too bad we can't take advantage of the offer! Ha! 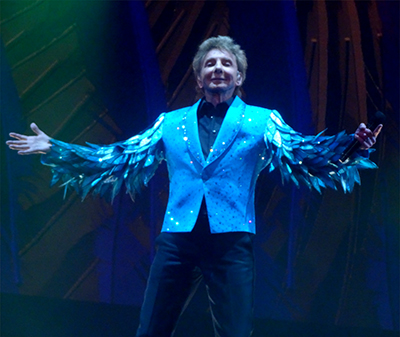 Copacabana really caught my attention tonight. Barry always kind of acts out the song - and sometimes he gets a little goofy with it. But I was seeing expressions I'd never seen him do during this song before. And some great ones, at that. 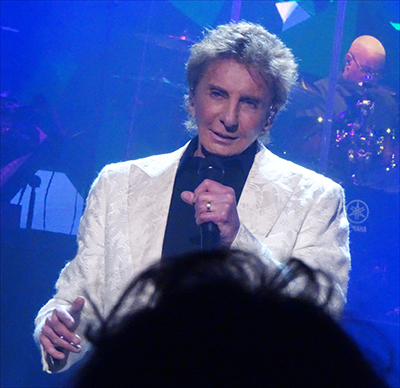 And even more smiles! I love when my camera of full of Barry smiles! 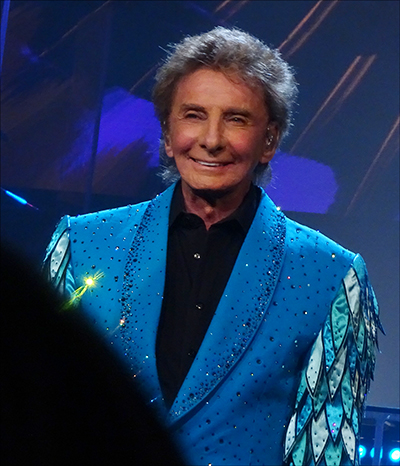 I usually can't see much of anything up on the bridge because of the bright spotlights that shine down on the audience. But tonight, during the, uh, "grab", Barry happened to position himself right in front of the spotlight, blocking most of the light. So, I could see his face a little. How cute! And when he puts his hand to his face as if he had just done something bad, and then blames Kye for it. LOL!

It was such a fun show!