Barry opened in the blue jacket that we first saw on Broadway. I really like that jacket. Well, I really like most of his jackets - he has awesome jackets! But I do like this. 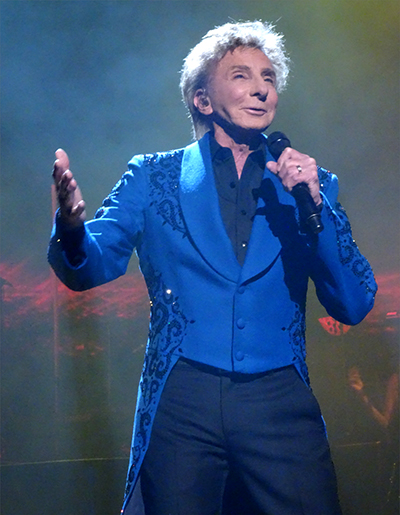 Barry seemed happy to see us. Looking around before the show, it seemed that it might be a tame audience. But no, they were very responsive to Barry. 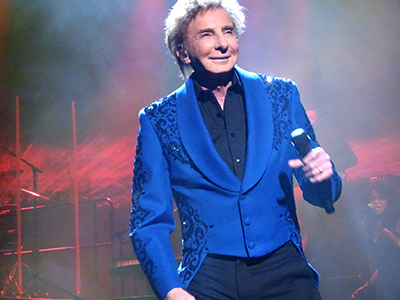 This One's For You was a great performance. I didn't feel it as much as I did at the last show I attended. I think the performance had a different tone which didn't resonate with me as much as it does at times. But that doesn't mean I didn't like it. It was still so beautiful. And Barry did tug at the heart strings a few times.

Still having fun with Let's Hang On. Barry REALLY gave us a rock star pose tonight. This just looks so cool! 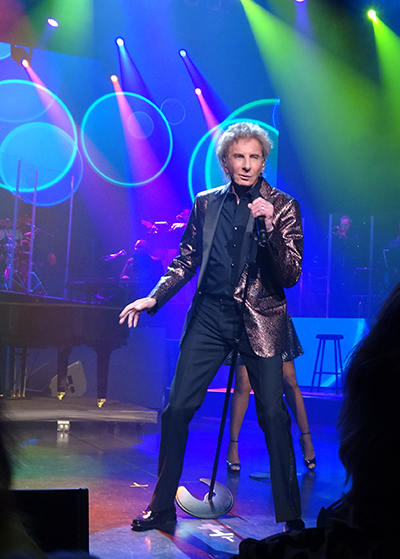 Back to the jackets topic... I think Barry may have a new jacket. New to me, anyway. It's very similar to what he's been wearing during Even Now. But something about the color seems to be different. It was really striking! When Barry put it on, he did his "don't I look fabulous?" gestures - so cute. Then he picked up the mic and said, "K-Mart." Yeah, right! We know Barry's taste in jackets - bright, shiny, sparkly. And expensive! Ha! I can't fault him. I tend to fall for sparkly jackets, too. There's one in a shop here at the hotel that's calling to me. Must resist! Ha! 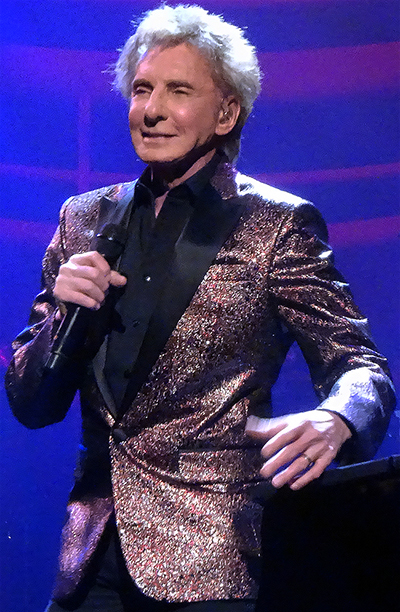 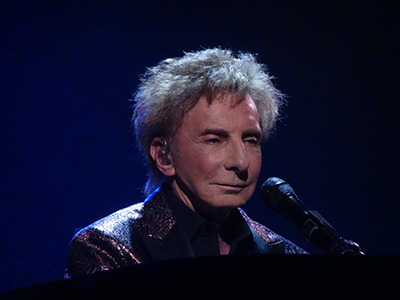 Someone described this photo as intense. That's a good description. That's what I was picking up from his performance. Sometimes when Barry performs this song he seems very sad. Other times he seem frustrated. But tonight it felt like sadness/frustration bordering on anger. VERY intense. I'm so glad I caught this moment, because it's different. 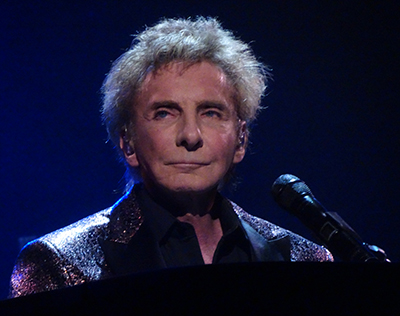 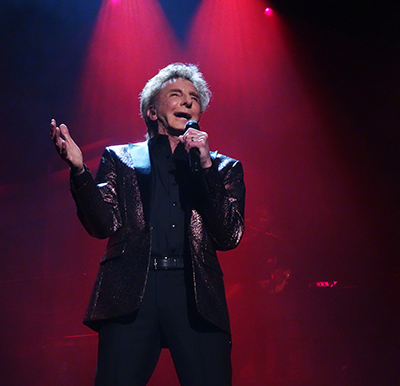 This is Barry from On Broadway - right after he failed to do the "I'm a star" hand gesture that he always does if I don't pick up my camera - and that he always fails to do if I decide not to try for a shot. I don't know whether to laugh or cry. I guess I'll laugh - he's laughing! 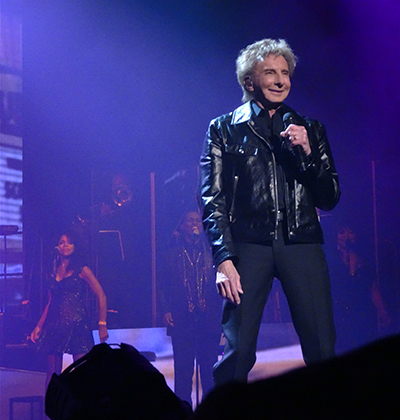 Weekend In New England was beautiful. My mind kept going back to a recent interview that Barry did where he said that WINE is the song that he's feeling the most right now (very much paraphrased). I found myself wondering why. Not that I'm wondering about his personal life. I just know that each of Barry's songs can strike me in different ways depending on what's going on in my life. And I've spoken with many people who don't get that at all. So, I guess the interview made me wonder if Barry approaches his songs in a similar way. Makes me a little less weird, if he does. 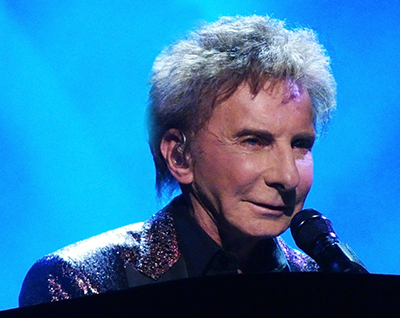 Anyway, Barry's performance of WINE was beautiful. As with Even Now, a slightly different performance. Plenty of emotion, less passion - best way I can say it. That sigh at the end, oh, my goodness... 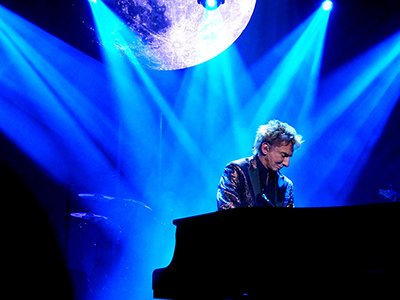 The commercial segment continues to be a hit. The audience really seems to like it. Oddly enough, that's one of the easiest spots to take photos. It's all the way across the room, but the lighting is so easy to deal with. And I still like Barry during that segment - I like the casual atmosphere. 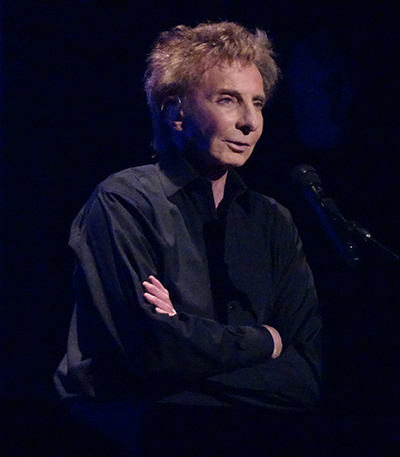 Tonight when Barry was talking about the record company wanting to do an album, he went through the most precious range of expressions. I did take photos, but individual shots just won't convey what I saw. You had to be there! 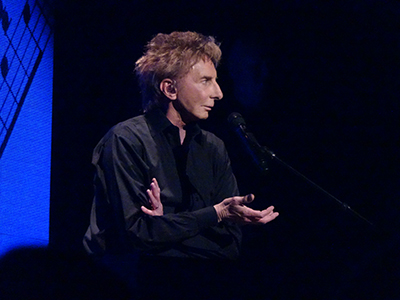 Barry gave us a really strong performance of Mandy. As with some of the other songs tonight, it was very intense. 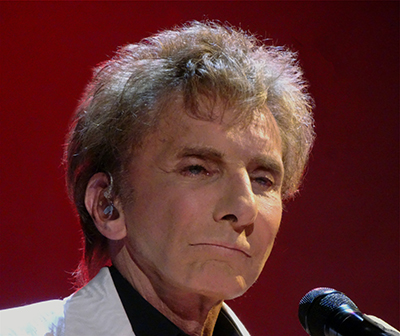 I Made It Through the Rain has become an enigma for me. On the one hand, Barry is performing this song so beautifully, and putting so much feeling into it. And the lyrics are very positive. Night after night, it has a huge impact on the audience. 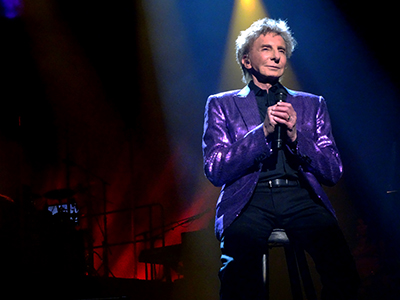 And yet, this one makes me want to slash my wrists more than Even Now. Go figure! Well, Barry always said that he wants to make us feel. So, he does!

That's okay. It's a beautiful song. With a great message. And who can resist Barry when he has a smile playing on his lips. 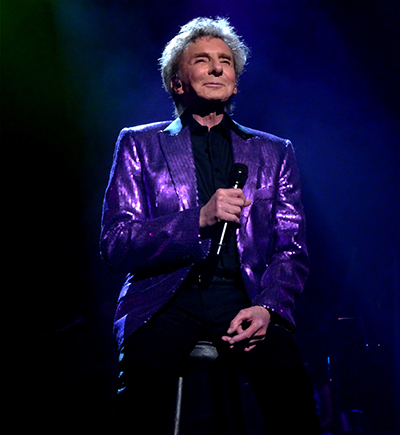 I think it's just that if you've literally made it through the rain, been through a hard time and came out on the other side in good shape, then it's really easy to see this song as a song of hope and of having a positive message. But if you're still in the middle of the street getting soaked, and you feel like you've been getting soaked forever, it's not quite as easy to buy into the motivational stuff. Ha! I think that's how my mind is approaching the song right now.

Amazing how Barry's songs can be viewed with different interpretations, even from one day to the next.

I really like the current lighting at the end of I Write The Songs. I like the bright colors as Barry sings that final note. But I also like the transition to blue as Barry does the "follow through" after the last note. He kind of looks like a pitcher in baseball, the follow through after the pitch! Don't ask me why that pops into my head - I don't follow baseball, or any sport. Love to play the sports. But if you want me to sit down in front of a TV and watch a game, you're going to have to chain me. I don't have the patience for that. So, I don't know why the image of a pitcher following through pops into my head, but it does.

And whatever... I just love the way Barry looks when does this. 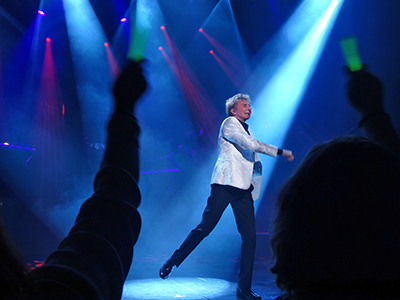 Not the best photo in the world, but I loved what Barry did when he appeared at the top of the stairs in his Copa jacket. Looks like he's saying, "Anyone want a hug?" Me, me! I want one! Actually, everyone in the audience was saying the same thing.

And then the end. Too soon, as always. 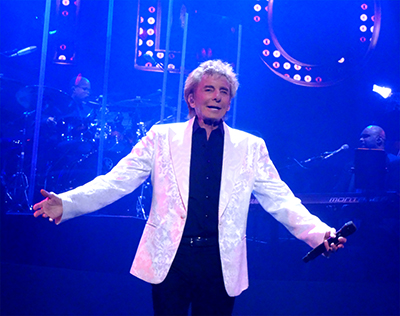