What a great beginning to the new year! Awesome show! Barry sounded great!

No new songs yet. No early performances of songs from the new CD.

For the most part, the show was unchanged - only subtle differences in the way Barry introduced songs, or made funny little quips. There were also subtle changes to the way Barry performed some of his songs, vocally and in terms of choreography.

Barry did change up the words a little in his song introductions and moments of conversation with the audience. And a couple of new jokes, too. He emphatically stated that his show is a high energy show, that he doesn't just sit at a piano and play. He also talked about 70's music, and how great it was - and how he loved listening to the radio back in the 70's because of how great the music was - and then he said, "...because most of the songs were ME!" What a coincidence! That's why we liked listening to the radio in the 70's, too!

Looks Like We Made It was great. How to describe it? For most of the performances, there were no extremely passionate moments, no extremely emotional moments. But all of the performances were solid. As I said, Barry's voice sounded great. He still interpreted the lyrics, but just not as strongly as he has in the past. I guess the best way to say it is that he didn't pull the feelings out of you the way that he's been known to do. It was kind of up to you to pull upon your own experiences to put the extra layer of meaning and feeling into the song. And nothing wrong with that at all, although it's harder for me to do that.

So, that's kind of what I got from LLWMI, and from most of the other songs tonight. But it was very enjoyable.

And I love this red jacket against the blue background. I really do love this jacket - it's one of my favorites. 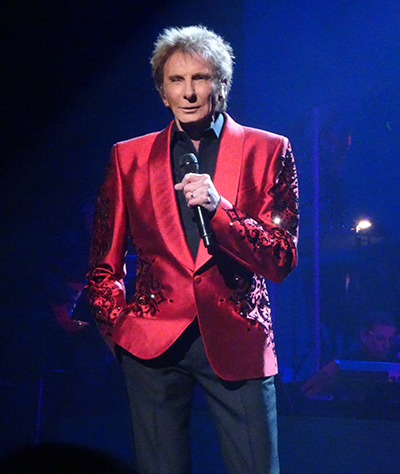 There was an interesting moment during the show - and it appeared to be unplanned. Barry didn't perform Even Now. All appearances were that he was going to perform the song. He walked to the side of the stage to change jackets. The lighting theme turned to the deep red, the piano started to move forward. But instead of walking to the piano, Barry took a few steps toward the front of the stage. My view of him was blocked at that point, but it sounded like he might have sighed before speaking.

Then Barry told Ron W. that he wanted to do the 80's song, and asked him to pull that one up. At first I wasn't sure he was talking about Let's Hang On, or if he was about to perform some other song. But then he started his standard Let's Hang On intro.

So, an unusual moment. No idea why he chose to skip Even Now.

I actually did miss Even Now. It might make me want to slit my wrists at times - but not enough for me to want the song to disappear.

But, we had fun with Let's Hang On! Still as much fun as always. But... No mic stand bit. Okay, so I love that pose. But really... All you have to do is look at those sparkling blue eyes and you see it - even if Barry isn't really doing it.In all fairness, the piano was still postioned on the front of the stage - where it should have been for Even Now. When Barry pulled Even Now out of the show, the piano wasn't moved back. Or maybe it just refused to move back. It was saying, "Hey! Barry is supposed to play me now! No, I won't go!"

And also, in all fairness, Barry did TRY to do the mic stand bit. He grabbed the mic, but there just wasn't enough room for him to lean as far forward into it as he usually does.

As usual, standing and singing to Can't Smile Without You made me uncomfortable. Not quite as bad from the 4th row, though. A lot more people to hide behind! It was fun tonight. I mean, I still had the classic anxiety symptoms, but it was still fun. Love that I captured this moment toward the end of the song. He's so cute! (Barry, not Mr Smiley Face. Well, Mr. Smiley face is cute, too.)

This One's For You was great, too. As with LLWMI, there were no extremes in the song. It was just a solid performance, true to the lyrics. And true to the Grandpa story.

The depth of feeling was a little stronger toward the end of the song. Again, no extremes. But there was enough there that I could pull from what Barry was projecting. 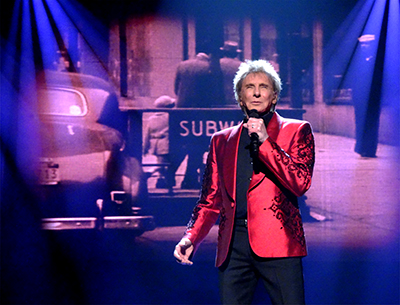 I half expected the This Is My Town segment to be removed from the show because of the new CD. And I guess it might still happen. But it was still in tonight. Barry is still performing TIMT with joy. 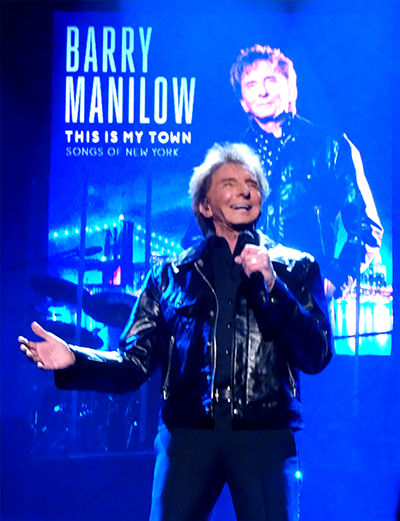 One of the other changes I noticed tonight was the mannerisms and vocal inflection during Weekend In New England. There are several things during WINE that we've grown accustomed to, such as the way Barry throws his right arm up in the air during especially passionate moments. Even vocally, Barry has unique ways of singing certain lyrics. And WINE serves as one of the biggest examples of songs that Barry has made changes to over the years. Tonight he made some changes in all those areas. Without going into detail, it felt different, but only because I have grown used to the way he has been performing the song for a long time. It was still just as beautiful. And still felt passionate, although perhaps the passion was a little more subdued.

The lighting was still spectacular. I don't know if something has changed with that, or if it was because I was sitting farther back - but I had almost no trouble at all capturing the lighting. But, also, it didn't appear that Barry's eyes were bothered quite as much. Speculation, based on my observances, of course. I don't really know. 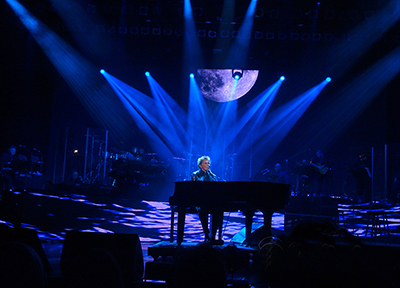 The commercial segment was very cute tonight. Barry made the joke again about Chopin decomposing. Some guy behind me said, "That's cruel!" I don't think Chopin cares. Barry gets some of the cutest expressions on his face when he's cracking jokes and looking out toward the middle of the audience.

One of the cutest moments of the night was when Barry started singing We Are Family. Yes, THAT song! (you know, Sister Sledge) Ha! He had been talking about how he considers the band members to be his family. He made the statement, "we are family." But then he slowly sang the line. And he kept singing the line as the band started to play the music to the song. Then as the band started playing along, and the backups started singing along. And then Barry encouraged the audience to sing with him. A few people did - not many. Heck, I even sang a line or two. That's one of my favorite songs from my oldie playlist! And if this morning is any indication, I'm going to walk around singing the chorus of that song to myself all day - because it won't get out of my head!

I Made It Through The Rain was very good. Again, no extremes. The song didn't bother me this time. It was a nice performance. 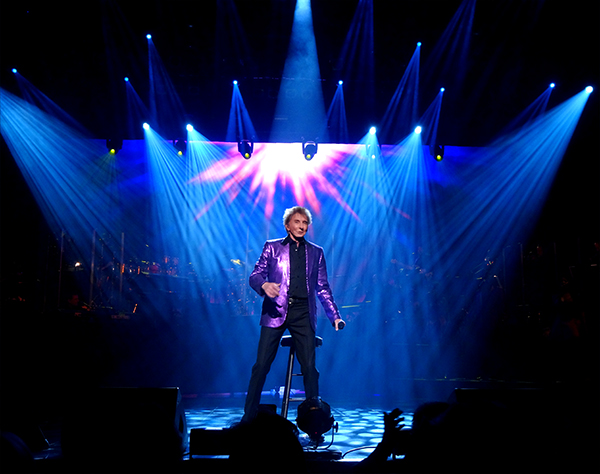 I love the way the lighting fell on the audience at the end of I Write The Songs. The colors and shadows were wonderful. 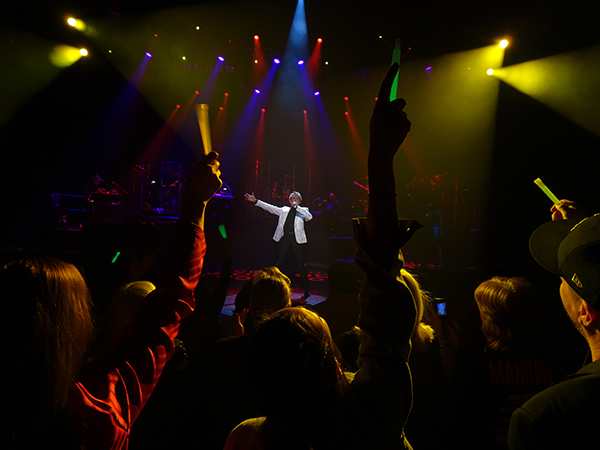 The backups handing Barry over to us here. Y'all realize that one of these days we aren't going to give him back, right? 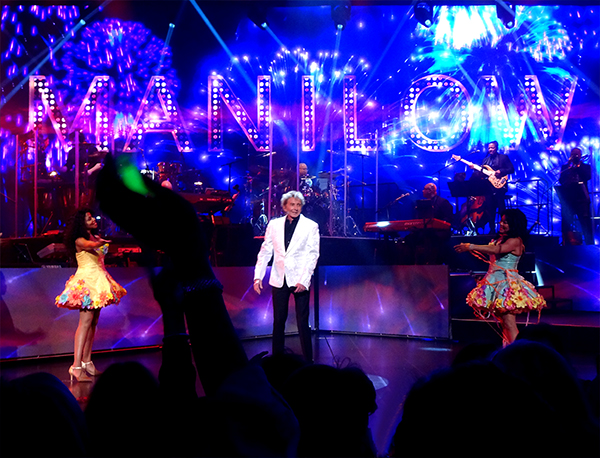 And then Barry waved goodbye. 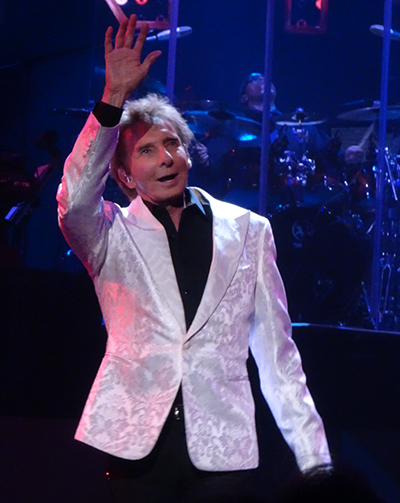 So glad I made it back for at least one more trip. Barry kept saying he was gone for 3 months. I think it was more like 4 months. Whichever - it felt great to get to see him again.