Wow! I hit it lucky at this show. A friend was unable to come to this show, so I was able to move one seat closer to center. And then the lady sitting dead center asked if I would switch with her so she could sit with her friends. So I wound up moving to dead center! Awesome!

The fog was back, although not as bad as it had been on the first night. I like a little of the fog, especially when it swirls around. Like during On Broadway. 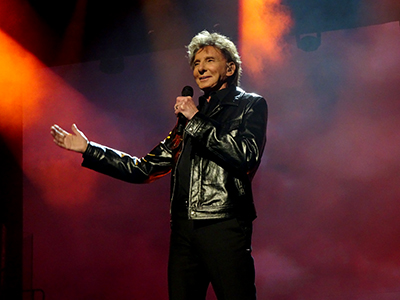 Barry didn't play with the audience during Looks Like We Made It as much as he's been known to do. But the performance was more expressive than it has been the previous two nights, and the tone was a little lighter. 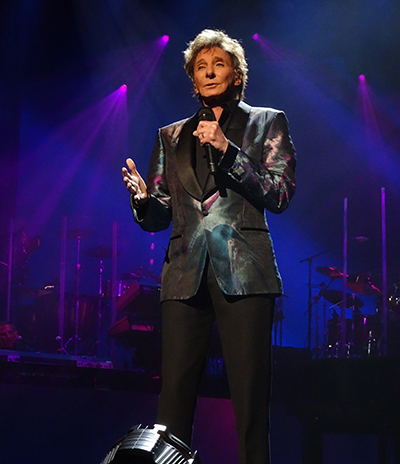 Barry was more expressive with Brooklyn Blues, too. And he really did engage the audience at one point. Hey, I even got butterflies during that song!

As long as I manage to get one good case of butterflies each trip, I'm thrilled!

This One's For You was about Grandpa, but Barry still made it dreamy at times.

In my platinum, Barry had kind of apologized because there were few changes to the show in Vegas. And I told him that was alright, that he was different every night. He kind of shrugged off my comment, as if I were just saying that to make him feel better. Well, no... I wasn't just saying it. Dana never just says anything.

Even Now's performance was a good example of Barry doing something different. Tonight's performance had a couple of differences in it. One is the way Barry sang. It was another sad performance. But it was also very tender - his voice was very tender as he sang. That one difference took the song from being just a great performance of a big ballad to sounding like the truth. It made the song sound very genuine, and by doing that, caused an even greater emotional impact.

Another difference in Even Now was the way that Barry delivered some of the lyrics. That's not unusual. Barry does emphasize some lyrics more than others, and the lyrics that are emphasized can change from night to night. Tonight Barry did something different with lyrics early in song. He looked up toward the audience during a portion of the song where he never looks up at the audience. So, that by itself caught my attention. That slight difference, coupled with the tender way he was singing, changed the tone of the song.

It's just a small thing. But it's different. I counted up, and I've seen more than half of the shows he's done since he's been back at the Westgate, probably close to 2/3 of the shows, if I counted right. I notice differences like that in every show, even if they're small. And so, I don't feel like I'm seeing the same show. I definitely did not see the same performance of Even Now tonight that I had seen at the two previous shows.

Anyway, the first part of Even Now was very tender. But Barry dived into emotion toward the end of the song. It always gets to me when I see him do things like this. 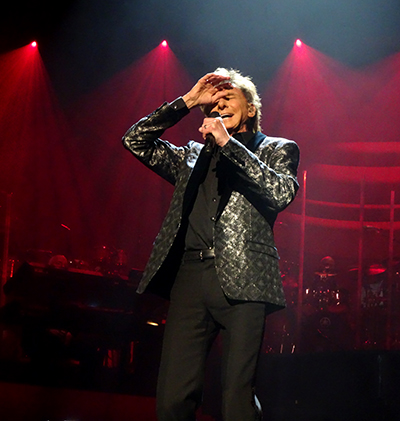 Something else that Barry did differently tonight, during Let's Hang On... There's a spot in the song, toward the end, where there's a progression of notes down the scale. I don't know how to describe it in a better way. At any rate, I've always loved that. It's tiny piece of music, but it sticks in my head. I do that sometimes - I may not even like a song, but there might be a 5 second portion of it that I love. Well, I like this small progression of notes. And Barry has been doing that vocally for quite a while now - and I love it. He's been doing it in an exaggerated way, sometimes even with a silly face. But tonight he didn't exaggerate it. He just sang it, effortlessly, and I loved that even more!

That's what I meant when I told him that he was different every night. Because he is. People ask me why I don't get bored. It's because I see all these little differences. It keeps it very interesting for me. And so when you have that on top of Barry's ability to own an audience, it's just heaven every night.

You know, I'm really starting to get on my own nerves when it comes to catching the mic stand shots during Let's Hang On. No matter what I do, they seem to be overexposed. This shot has been corrected (somewhat) with Photoshop. I even took the time tonight to be sure that I adjusted the exposure compensation before this moment. That's about all I can adjust on my camera - we're talking about a $450 dollar camera that's a few years old, as opposed to the $3000 camera I take to the Secret Garden. So, it's doing a good job, considering. But still... I'm getting on my nerves!

At one point during the show - can't remember which song - I heard an interesting run on one of the keyboards. I don't know which guy did it. But it was different and fun. And I looked at the guys, and they were smiling and laughing, so it appeared they were having fun with the music. And that was fun for me. 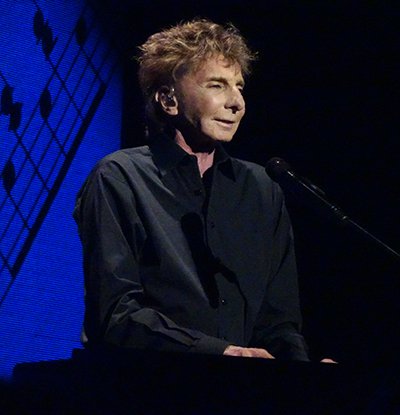 Haven't seen the finger wiggles in a while. That was fun! 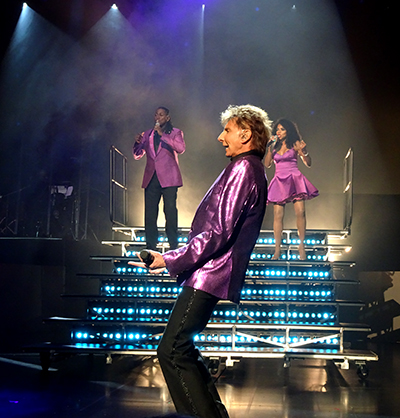 On this trip, Barry has been throwing his coat tails back before he does this - just like he did on Broadway. That, uhm, gets your attention...

But the cutest thing was when Barry did the extra set of BAMs, after CIBM was over. He does them, then pretends he hurt his back. Well, tonight, between doing the BAMs and grabbing his back, and he turned and gave us this pose. It was like he was saying, "I'm still a sex god - SO, THERE!" It was so cute!

I was a little zoned out during Mandy, thinking about events of the weekend, until I saw this expression. It dawned on me that I was missing a really emotional performance. Barry did a great job. 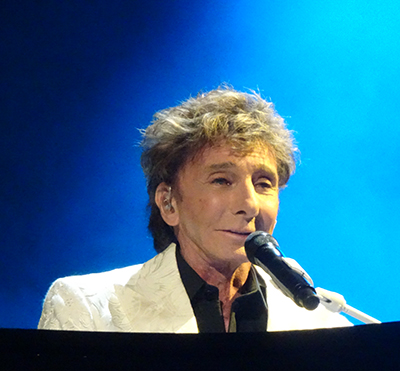 He was really into the song. And I love the red background during this song. 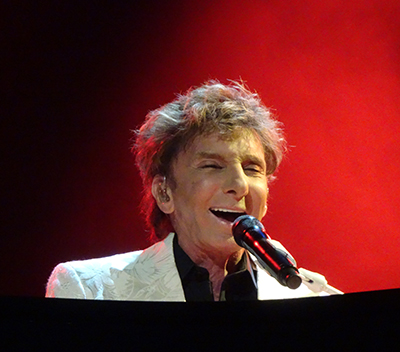 This is something I usually don't catch. In fact, I think there's only been one time in the past when I managed to catch this part of Mandy. This is when Barry is hammering the piano at the end of Mandy.

When I first saw this shot, I thought it was cool. Pretty colors, and intense expression on Barry's face. But then I started looking at the following shots. I loved the progression of the shots.

First there was a smoky, bright light behind Barry. 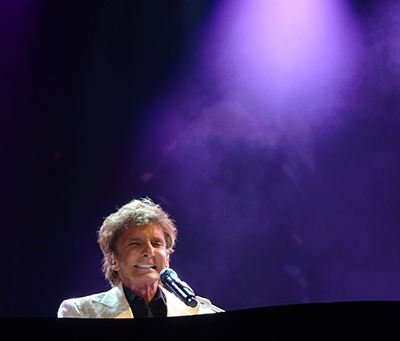 And then an almost ghostly image began to appear. It was like Baby Barry visiting from the past. 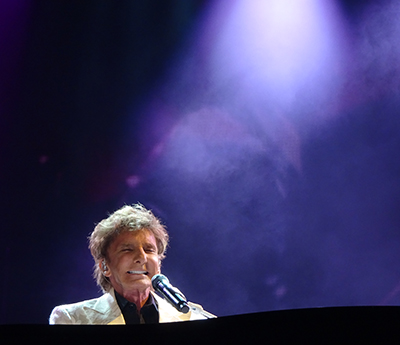 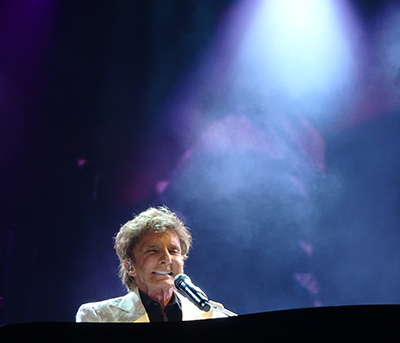 I love the way that looks. It fits in so well with the song.

Last time I shared some photos that showed the great lighting transitions during the final note of I Write The Songs. Well, here are the last two transitions. They're just as spectacular. 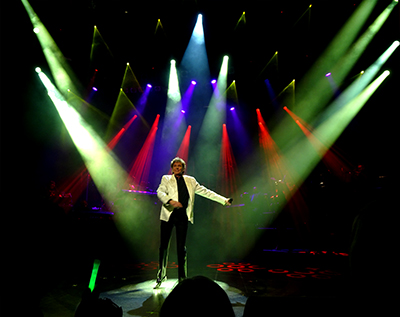 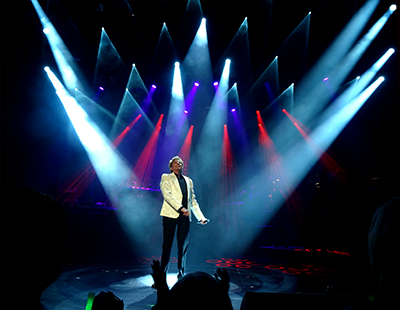 Kind of hard to catch all the backups smiling during the group shot, but I got lucky tonight.

And the streamers fell perfectly at Barry's feet. 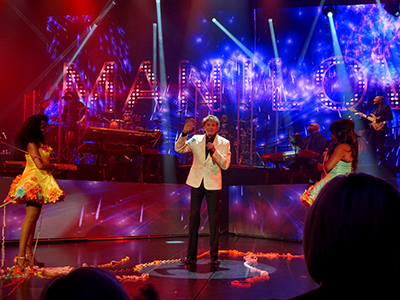 And then it was over. Not so hard when I know I'll be back the next week. Now, the end of October - that's going to be hard.