Great show! Receptive audience! Really, thinking back to the Hilton and Paris shows, Barry has had some very good audiences here.

I liked the transition of It's A Miracle to Dance To The Music. In the past it's seemed to be abrupt. But tonight Barry led into the change, in a very subtle way. It caught my attention. In fact, I'd forgotten about Dance To The Music. But I noticed the soft change in Barry's voice, the notes he was singing, and it was like, "Oh, yeah! They're going to do Dance To The Music!"

Something that really struck me tonight - and this isn't a positive thing, sorry, in advance - but what happened to the beautiful lighting? I mean, the lighting in the background - the bright colors and beautiful color combinations. Actually, they were there, but most of the time they were obscured. The fog/smoke effect from the beginning of the show just never seemed to go away. You could see it hanging in the air, especially surrounding Barry, because the spotlights on Barry reflected off of it. That's always been the case to some degree, but lately it seems to be more noticeable. I've mentioned before how there are moments during the show where the different colored spotlights are so dense, they seem to have a physical quality, a 3D existence. Tonight I noticed a couple of instances where the background lighting was normal, but the spotlight on Barry (and the effect of that with the fog) took on that same physical quality and was actually a barrier, blocking our view. That's not necessarily a bad thing. I Made It Through The Rain is an example of it being a good thing. When the song starts off, Barry is standing there in that cone of thick, white light, and it looks awesome. 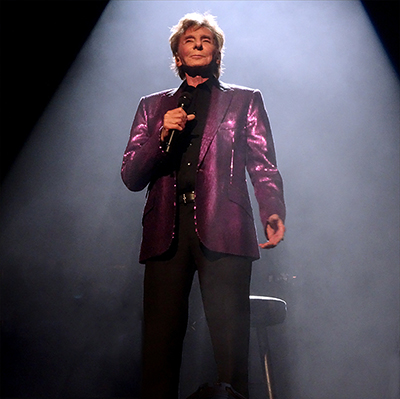 And then there was the oops moment, when they had no spotlights on Barry at all... LOL

There were still some great lighting moments. I love those blue spotlights at the end of It's A Miracle. For some reason I have a hard time remembering that's coming, and so I miss the shot. I'm going to keep telling myself all day to "remember the blue lights." Since I'm on the front row tonight, I may be too freaked out to even pick up my camera, but just in case, I'm going to keep reminding myself.

This One's For You was for Grandpa tonight. At least, that's how it felt to me. Barry didn't just say that it was for Grandpa - he gestured, and he gazed upward several times throughout the song. The subtle things that pointed toward Grandpa took this performance completely into that world. Usually you're left with a little freedom to interpret the song in the way most meaningful for you, but tonight it was all about Grandpa.

Even Now was a great performance, but it didn't seem to have the same amount of feeling. That said, the audience loved it and Barry got a big ovation. Barry just didn't seem as expressive. Or maybe he did. It's just that the song seemed sad all the way through - no varying degrees. That final note was a killer, though. Wow!

I-heard-a-new-thing moment... Well, at least I've never noticed it before... When Barry was performing the slow version of Could It Be Magic at the end of the commercial segment, I heard some electronic music playing very softly. Keyboard or synthesizer, something like that. It was very soft, but it set a mood or a tone. Kind of mysterious. Sounded like something you might hear in the upbeat version of CIBM. So, in a way, it was leading into the upbeat version of CIBM. Anyway, I liked that.

Barry was being very playful during CIBM. I love those teasing glances he throws out toward the audience. They're both sexy and cute - two for the price of one! I know Barry is working hard on stage, but sometimes it really does feel like he's getting a kick out of it, too.

Great show! Thanks to Barry and crew again, for all the work they put into this for us.

Now I have to spend the rest of the day trying to get calm...