The show really started out on a high note. Barry seemed very happy to be taking the stage.

I had an odd feeling. Its only been about a month since I was here, but it seemed like forever. And it felt like everything has changed since the last time I was here. But I was happy to be back.

There were no special introductions for Looks Like We Made It tonight. It was the standard introduction. The song was performed well, but it was somewhat distant. I didnt feel quite as much from the performance. But quite a few of the audience members felt something during one part of the song. LOL

Still, there were moments when I picked up a little on the old feelings. 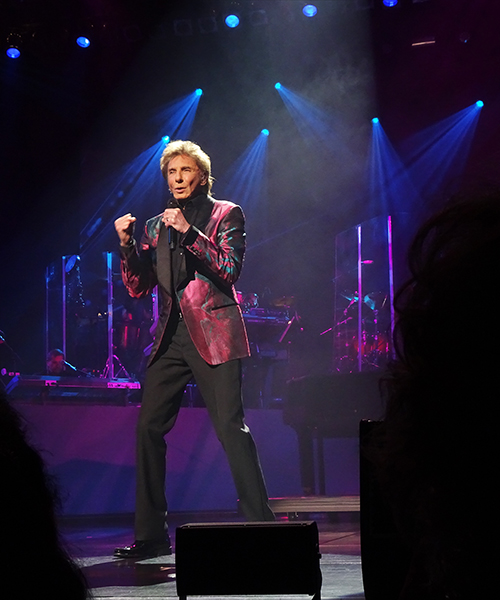 Sometimes when I'm going through show photos, I'll sit back and think about how Barry performed a certain song. And compare it to past performances I've seen. And sometimes I'll even go beyond that, and think about what kind of emotional reaction it would illicit if he emphasized this particular line, or made this gesture or facial expression. And that comes from having a history of these performances running around inside my head. If I happen to be thinking a lot about a particular song in the days preceding a show, I sometimes bring those memories with me. So, if I say that I didn't feel quite as much, it often just means that Barry took the song in a different direction for this performance.

I really think that's what happened tonight. Barry conveyed plenty of feeling - he just did it in a different way. After his changed introduction to LLWMI the last time I saw him, that song has been rattling around inside my head. I've been trying to figure out how he hears the song.

Anyway, I still felt the song. And Barry still showed emotion. This is as he sang the "do you love him as much as I love her" lines.

This Ones For You was also somewhat distant. Barry seemed to be very much pulled inward. He rarely looked up at the audience. He spent most of his time looking at the top of the piano. In a way, that fit in with the song lyrics. Barry seemed to be deep in thought, or maybe reflecting on something. So, the performance style told the story. But it was more from a standpoint of the audience being spectators. Barry is actually quite good at taking the audience along for the ride when he performs a song. Tonight it didnt feel like the audience was invited.

That said, Barry was very cute as he did the intro to the song.

And the ending of the song fell into the category of big finishes. 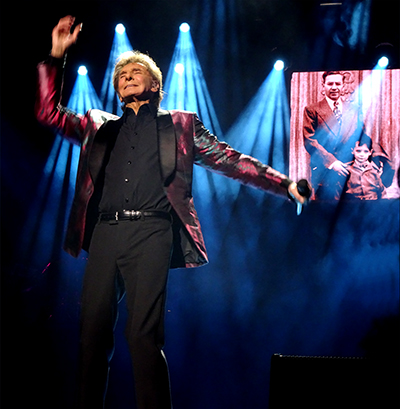 Its a bird, its a plane, its super Barry! I wanted to see if I could catch a shot of Barry as he runs towards the back of the stage during This Is My Town.

This was taken during On Broadway. Barry was really into the music. Mike had just done some excellent guitar work. This moment was as the horns were playing their featured part. 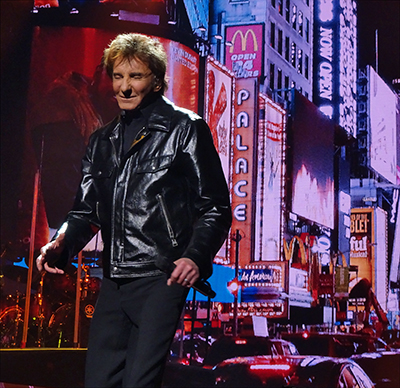 This shot isnt good enough to post anywhere except in the show notes. But I still like it. It looks kind of otherworldly. This was taken at the very beginning of weekend in New England. At the beginning of the song Barry is in the middle of white lights shining down. I caught this just as the white lights had started turning blue. And all of the fog is beginning to rise up from stage level.

Weekend in New England was another song where Barry spent a lot time looking at the top of the piano. But that didn't diminish the passion of the song. Barry did a great job with it. This shot is from pretty early in the song - not from one of the spots where he gets very passionate. 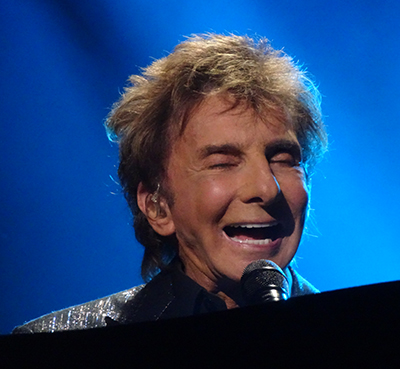 People yelled out again, of course. This time Barry didnt stop singing. But he did get a bit of a smile on his face and he looked over at the audience. And he also did say a brief thank you. 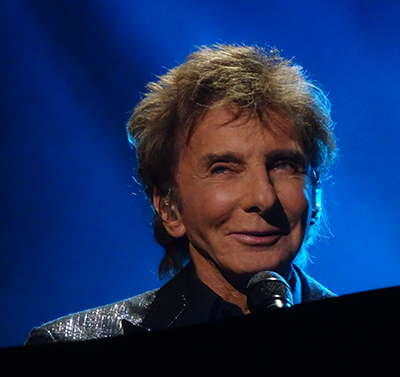 Barry did something slightly different at the end of WINE tonight. I think he might have been playing around a little bit. Instead of reaching up to "turn out the light," he started the motion, and then paused. 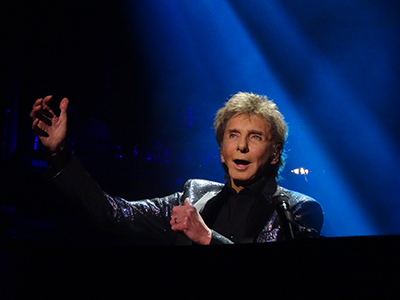 He then continued, but this time he turned more toward the audience as he did it. 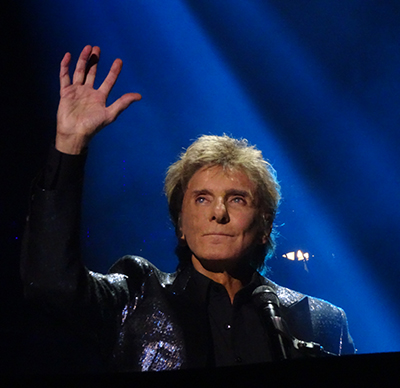 Would you believe this is from Let's Hang On?! It looks like a ballad shot!

But then we moved on to rock star Barry! 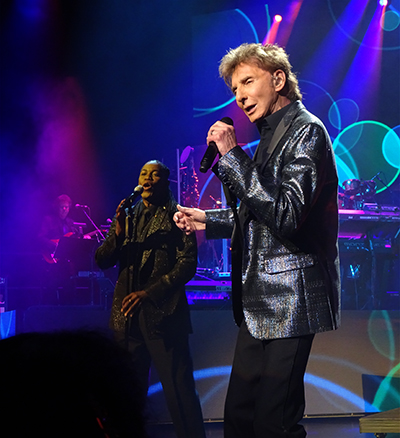 I love Let's Hang On so much!

Even Now with somewhat like TOFY, Barry spent a lot of time looking at the top of the piano during this song. There was more feeling in this song though. Definitely sad. The ending of the song was powerful.

Barry was extra silly during the commercials tonight. He played around with the beginning of the Band-Aid song. That was really cute.

And it's actually really fun, too. Not jut because it's cute. But because I love watching Barry play around with the piano and his vocals. It gives the show a more intimate feel. It feels like you're just sitting in his living room watching him play around. I love it!

Wow! This is a serious look. Despite it appearing that Barry is looking right into the camera, I was too far away, I believe, for that to be the case. So I just got lucky and snapped at the right time. Glad I did, though. I love this expression, even if it's very serious. 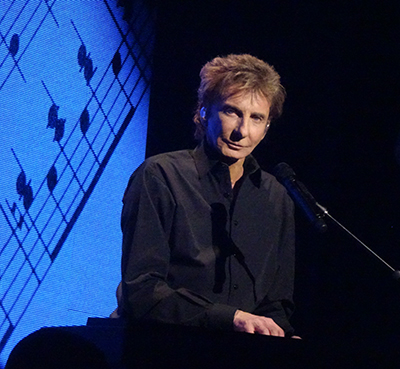 Of all the shots Ive taken of Melanie and Barry during this portion of Could It Be Magic, I think this one is going to be one of my favorites. I love the attitude from Barry! 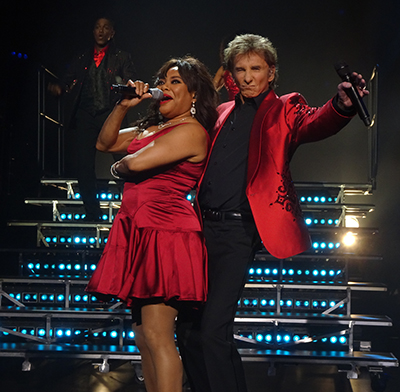 CIBM was so much fun. It always is, of course.

Barry surprised me tonight, so I missed the shot. But he added a little something extra to his monologue where he mentions being a sex god. There was no banana joke tonight. Instead, he mentioned being a sex god, and then threw in 4 BAMs. Complete with drums!

I loved it! I hope he does it at one of these next two shows so I can get a shot of that.

Barry did a great job with I Made It Through The Rain. That one is still hitting a little too close to home for me. And I most definitely have not made it through the rain, yet. But I appreciated the performance. Barry did a wonderful job of conveying the song.

Love this yellow spotlight in the background, and the fog swirling around in the air. 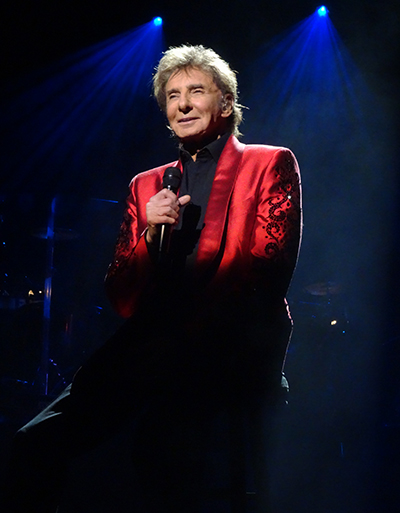 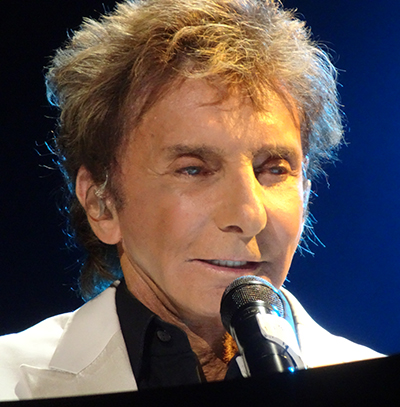 The song that seemed to be the most emotional for Barry was I Wite The Songs. I dont know why, but there was just a feeling coming from him, an energy that was kind of, well, deep. I cant think of another way. Well, I can - but I don't like the associated memories. When Barry would be ending something - a tour or something like that - I would feel something very similar in this song.

Barry didnt seem to be reflecting, or drawn inward - at least not in the way he did on other songs. But it did appear that this song tonight had some kind of deep meaning to him. There was a touch of sadness to it. But also gratitude.

This isnt a good shot because the lighting that they have on Barry during this song is not very flattering. Although, I also have to say this is the best it has ever looked since the shows started here at the Westgate. Anyway, not a great shot, but the expression on Barrys face in this picture demonstrates kind of what we were saying. I'm not sure if it's just the lighting in his eyes, or if those are tears. 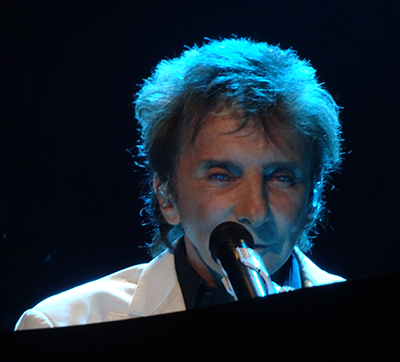 I love the pink jacket! 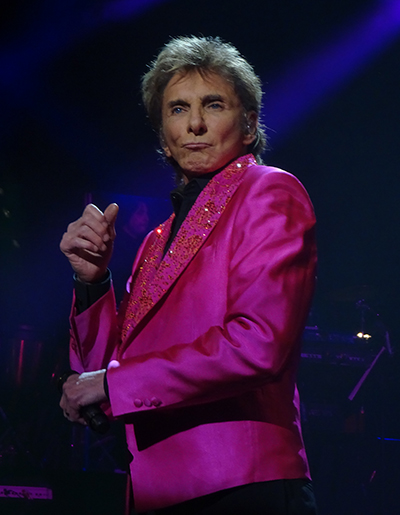 It was a great show as always. Already looking forward to tomorrow night's show.